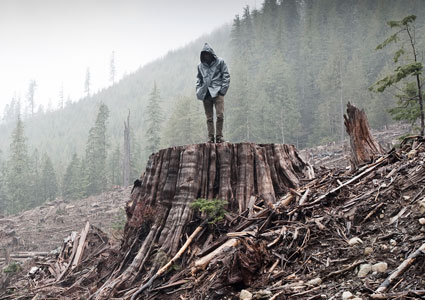 If A Tree Falls: A Story of the Earth Liberation Front
Oscilloscope
85 minutes

One day in December 2005, documentary filmmaker Marshall Curry’s wife came home with some surprising news: Four federal agents had arrived at the domestic violence organization where she worked in Brooklyn and arrested her coworker, Daniel McGowan, on charges of eco-terrorism. McGowan, a sweet, quiet guy who’d majored in business in college and was working towards a master’s in acupuncture, seemed an unlikely terrorist, and Curry—whose first documentary, Street Fight, about Cory Booker’s first mayoral campaign, was nominated for an Oscar in 2005—was intrigued. He and co-director Sam Cullman set out to figure out how McGowan had ended up in handcuffs, and discovered a fascinating, sobering tale of a sensitive idealist’s gradual radicalization in the face of an unresponsive political system. Curry and Cullman’s thoughtful film—currently in the running for an Oscar in the category of best documentary—couldn’t be more timely amidst the debate over activist tactics that’s been renewed since the Occupy Wall Street protests emerged last fall.

In the mid-’90s, McGowan was working in New York City when he started attending meetings of the Wetlands Preserve, an environmental collective; soon, he was protesting everything from primate research to mining companies. Eventually, he made his way to the Eugene, becoming deeply involved in battles against the timber industry. Fed up with the failure of more traditional forms of activism—protests, letter-writing campaigns—to stop the logging of old-growth trees, McGowan started wondering what would actually work. “Sometimes when you see the things you love being destroyed, you just want to destroy those things,” McGowan says in the film. “When you’re screaming at the top of your lungs and nobody hears you, what are you supposed to do?”

According to the Earth Liberation Front, a collection of autonomous cells of activists ready to engage in militant action, you were supposed to take things into your own hands. ELF cells sought to sabotage activities and development they considered environmentally destructive and cause economic harm to businesses they considered environmentally harmful, primarily through property destruction–though they were careful never to hurt or kill anyone. Targets ranged from a wild horse slaughterhouse to a Vail ski resort; McGowan served as a watchman for the arson of the offices of a timber company in Eugene. ELF activists were good at what they did, and they didn’t get caught, but eventually, went quiet as internal disagreements about ethics and effectiveness fractured the network of activists. But law enforcement stayed on the case. In December 2005, the FBI arrested several former ELF activists, including McGowan, and indicted them for arson. A U.S. District Court judge ruled that the fire was set for purposes of intimidating or coercing the government, making it a terrorist act and giving her the authority to sentence McGowan to life in prison (she gave him seven years). The “terrorism enhancement” raises interesting questions about what constitutes terrorism and in whose eyes; as Eugene’s police captain says, “Arson is arson. But is it terrorism?”

If A Tree Falls aired on PBS last summer, a couple of months before the Occupy movement got underway, but the parallels are remarkable. An encampment of protesters blocking a logging road looks a lot like Zuccotti Park did this fall, and it’s impossible to watch images of policemen dousing protesters with pepper spray, or in one horrific scene, dabbing pepper spray directly into the eyes of protesters being held in custody, without thinking of similar instances of police brutality in New York and Oakland. And if you’ve been following the recent arguments about the role of Black Bloc, the clashes within the movement over tactics and goals will be all too familiar. Indeed, the film depicts many common tropes of contemporary social movements: people are radicalized by police brutality; an edgy young guy goads others to stop talking and do something; protesters clad in black smash windows while others yell at them to stop

While the film may be particularly relevant considering the current political backdrop, the personal aspects of the film are also compelling, offering an intimate portrait of McGowan’s confusion and regret as he faces the consequences of actions taken years ago. And Curry and Cullman have unearthed some incredible footage—it’s hard to believe that not too long ago in America, a band of radical environmentalists were burning buildings to the ground, but there it is on screen.

Since then, the environmental movement has grown enormously as it’s moved into the mainstream. But has the movement gotten closer to achieving its goals, or just diluted them? As McGowan says at one point in the film, “things are worse than ever,” particularly with climate change looming on the horizon. And the question of what to do when conventional political systems and tactics aren’t working remains unanswered. Indeed, with people once again frustrated with the failure of conventional politics to address problems, direct action appears to be back in style, from Occupy to the anti-Keystone protests. McGowan’s coming to the end of his seven-year prison term, and is eligible for release from prison next year; it’ll be interesting to see what the world makes of him then, and what he makes of it.