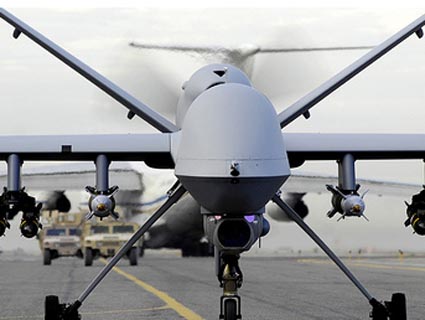 Buried in the recently released Washington Post/ABC poll noting improving numbers for President Barack Obama are numbers showing that Americans are favorably disposed towards the use of targeted killing in counterterrorism operations, even if the targets are Americans.

Here are the poll results: Overall 83 percent of Americans approve of the use of “unmanned, ‘drone’ aircraft against terrorist suspects overseas,” 59 percent strongly and 26 percent “somewhat.” Of those who approve, 79 percent think the use of targeted killing against American citizens abroad who are suspected of terrorism is justified. The Washington Post‘s Greg Sargent, who takes a closer look at the internal numbers, finds that “Democrats approve of the drone strikes on American citizens by 58-33, and even liberals approve of them, 55-35.” Whether as a result of partisan identification with the president or an artifact of the United States shifting to the right on counterterrorism policy in general, it doesn’t seem likely that Obama will pay a high political price with his base for either the escalation of drone strikes since taking office or the use of drones to kill Americans abroad suspected of terrorism.

The administration has faced increasing criticism from civil liberties and human rights groups over the nature and secrecy of its targeted killing program, including its efforts to block attempts to force disclosure of the legal rationale for targeting Americans without charge or trial, even as administration officials comment publicly on the program’s success. Recently, Secretary of Defense Leon Panetta revealed that, when it comes to the targeted killing of Americans suspected of terrorism, the final decision is made by the president himself. In an online forum, President Obama insisted that drones were being used with restraint, saying it was on a “very tight leash,” with extreme care being taken to minimize civilian casualties. Not everyone agrees with that assessment: The Bureau of Investigative Journalism says that since Obama took office close to 400 of the casualties from drone strikes in Pakistan have been civilians, with close to 200 of them children.

Republicans have criticized Obama for his use of targeted killing and special operations forces—mostly on the grounds that more dead terror suspects means fewer of them to interrogate. But the poll numbers suggest widespread approval of Obama’s approach to counterterrorism: Limited, covert, and with the collateral damage borne by individuals who remain far beyond the thoughts of most Americans.