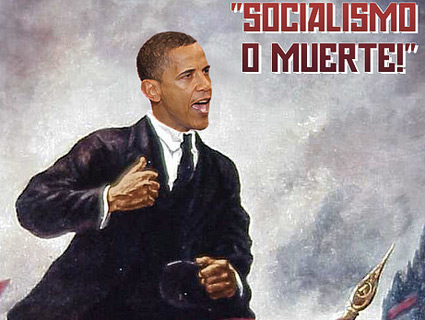 President Obama wants to conquer your farmland, plunder its resources, feast upon the contents of your refrigerator, and then draft you into slave labor for his aggressive war on Iran.

Such is the narrative that has emerged out of the right’s latest phony freak-out about Obama’s wielding of executive power. On March 16, the White House quietly released the details of an executive order titled “National Defense Resources Preparedness.” The order authorizes the federal government to identify “requirements for the full spectrum of emergencies, including essential military and civilian demand,” and to “control the general distribution of any material (including applicable services) in this civilian market.”

It’s your standard government readiness policy—nothing particularly exciting or groundbreaking. In fact, almost identical executive orders have been issued by administrations since the early days of the Cold War, including those of Bill Clinton, George W. Bush, and Dwight Eisenhower.

And some conservatives—who have previously accused Obama of wanting to confiscate their guns, ammo, Bibles, and even Cheerios and fishing rods—have taken this as one more assault upon individual liberty from a radical president. Because the order identifies essential items that should be stockpiled in extreme scenarios—from livestock and water to construction materials and pharmaceutical products—some on the right have sounded the alarm.

Late last Sunday, the Washington Times blasted out an email titled “Obama authorizes himself to declare martial law.” The column‘s author, Jeffrey Kuhner (who has a habit of referring to the president as a neo-pagan Lenin), writes that the order represents “a sweeping power grab that should worry every American” that “one would expect to find in Hugo Chavez’s Venezuela or Vladimir Putin’s Russia.” Kuhner posits that Obama is gearing up for a devastating transatlantic war with Iran, in which Tehran-sponsored Hezbollah cells would retaliate by bombing American cities.

Fox News host Sean Hannity claimed the executive order grants Obama absolute power in peacetime and crisis “over any and all American resources,” including food, plants, and energy sources. Pamela Geller, over at her anti-Muslim and birther blog Atlas Shrugs, labeled it the latest attempt by the Obama administration to nationalize everything (“even you”). She insisted that the order calls for an uncompensated “civilian draft” for government labor, and dubbed it a “totalitarian” edict from “der fuhrer.” Other outlets and commentators, including Daily Paul, Reason, and Alex Jones, weighed in with similar concerns. (Skeptics at the right-leaning Daily Caller, Hot Air, and even WorldNetDaily—yes, that WorldNetDaily—didn’t buy the latest conspiracy theory.)

The right-wing panic over Obama’s order reveals a fundamental misunderstanding of what executive orders actually do. The President of the United States can’t reform the nation’s entire economy and war policy through a single executive order. That’s not how the system works. But if you’re talking about a foreign entity launching a Red Dawn-style surprise attack on American soil, then things might be a little different.

This order only barely modifies the language of President Clinton’s “National Defense Industrial Resources Preparedness,” signed in June 1994. And those who fear it tramples upon freedom by enshrining the notion that the government can intervene in private industry during national security crises should probably direct their anger at Harry Truman.

“The problematic stuff in there, that can allow the president to direct private sector business decisions, has been on the books since the Defense Production Act [of 1950],” says Gabe Rottman, a legislative counsel and policy adviser at the Washington Legislative Office of the ACLU.

But what about a possible “civilian draft” without financial compensation? “I would be happy to entertain arguments for why this allows the president to involuntarily draft executives to serve in advisory or consultative positions,” Rottman says. “[The executive order allows] the president to employ, on a voluntary basis, uncompensated experts to help with emergency preparedness. It also contains various provisions that ensure that, if the job could go to a full-time salaried government employee, it would.”

There are important debates to be had over the Obama administration’s civil liberties record on various fronts: the administration’s shady policies on targeted killing of American terror suspects, government transparency, ramped-up crackdowns on whistle-blowing, military detention, and expansion of drone warfare. Manufacturing a far-fetched conspiracy out of something so routine is a distraction.

The White House did not respond to a request for comment on the executive order—which, of course, critics of the National Defense Resources Preparedness order would say is further proof that the Obama administration is secretly up to no good.