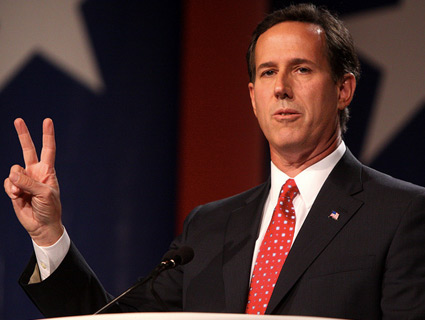 During a recent interview with Glenn Beck, Rick and Karen Santorum suggested that the Obama administration’s health care reform law would harm people with disabilities, like their three-year-old daughter, Bella, who suffers from a rare and usually fatal genetic disorder. In fact, it was because of President Obama’s health care overhaul, they said, that the former Pennsylvania senator decided to seek the presidency. “We have as you know a little angel, little Bella, special-needs little girl, and when Obamacare passed, that was it, that put the fire in my belly,” Karen said. Rick added that Obama’s Affordable Care Act is “all about the usefulness of the person to society, instead of the dignity of every human life and the opportunity for people who love and care for people to give them the best possibility to have the best possible life.” Yet, even as the Santorums bash Obamacare, their own family story—which includes staggering medical bills that would bankrupt many American families—makes the case for the health care policies that they vigorously oppose.

By cashing in on his senatorial connections to join the 1 percent, Santorum managed to escape the crippling debt that can come with raising a disabled child. But his tax returns appear to show how expensive caring for a disabled child can be under the current health care system, even for someone with health insurance. In 2009 and 2010, the Santorums racked up $100,000 in medical expenses—more than the median American family income each year—and that’s after their private insurance paid some costs. During that same time period, they also had nearly $100,000 worth of household assistance—help they didn’t have in 2007, before Bella was born. (The Santorum campaign did not respond to questions from Mother Jones about the exact nature of these expenses.)

“The financial implications [of having a disabled child] can be pretty catastrophic pretty fast,” says Katy Neas, senior vice president for government affairs at Easter Seals, which provides services to more than a million disabled people every year. “Families end up losing everything because of health care costs.” She says the medical expenses the Santorums have incurred aren’t unusual for families with disabled children. Private insurance plans, she says, don’t meet these kids’ needs, largely because they impose tight limits on payments for the various therapies disabled kids require. And until the Obama health care reform law passed, insurers simply wouldn’t cover many disabled children.

Nebraska resident Lisa Gourley knows this well. Deprived of oxygen in the womb, her son Colin was born with serious brain damage. After his birth, Gourley couldn’t go back to work because Colin needed round-the-clock attention and intensive medical care. The family had to rely on one income. And as Colin, now 18, got older, Gourley says that private insurance didn’t cover everything he needed. For instance, one year his feet grew faster than expected, and he ended up requiring a second set of $3,000 leg braces. Insurance would only pay for one pair each year.

Not only has he had 14 orthopedic surgeries, but Colin needs physical therapy between three and five times a week to stay out of a wheelchair. Private insurance would only pay for enough therapy visits to get him through March or April, leaving the family scrambling to pay for the rest of his sessions. The mounting medical expenses nearly sent the family of six into bankruptcy, a fate they only avoided by selling their house and moving in with Gourley’s in-laws for several years. Gourley’s husband lost his banking job during the financial crisis, and with it, their private insurance. Later, after her husband found a new job, Gourley discovered that not a single company would insure Colin. “They barely insure you if you have high blood pressure, let alone brain damage,” she says.

The new health care reform law now requires insurers to cover kids like Colin, but most of the provisions that will really make private insurance a viable option for families like the Gourleys won’t kick in for a few more years. So he remains on Medicaid, the government health care program for low-income people that has seen severe cuts during the recession, making it difficult for the Gourleys to even find doctors and caretakers who will participate in the program because the reimbursements are now so low.

Despite Medicaid’s crucial role in helping families with disabled kids, Santorum has promised that, if elected, he would further slash the program by 10 percent and then freeze the budget for four years. He has also proposed shifting the program’s funding into block grants to the states, a move that would likely result in severe budget cuts. Easter Seals, not surprisingly, opposes both of these moves because of the impact it could have on disabled people.

Of course, many middle-class families of disabled children like the Gourleys might not need Medicaid if private health insurance coverage were sufficient—but as the Santorums’ tax returns suggest, it isn’t. The new health care reform law that Santorum has vowed to repeal if elected is designed to eventually remedy part of that problem.

It will put an end to annual or lifetime caps on benefits, which are easily hit by disabled kids. By 2014, the law’s “essential benefits” package will require coverage for “habilitative” services, things like speech, occupational, or physical therapy, which are critical to the quality of life for special-needs children. And the law will increase payments to doctors who take Medicaid, which will help ensure that disabled kids in the program can actually find a good provider.

Beyond that, the Affordable Care Act expands the number of people who are eligible for Medicaid to include families making 133 percent of the federal poverty line, so that more disabled children will be covered. Santorum is deeply opposed to this sort of socialism. In November, he complained that people who weren’t stuck in poverty could qualify for Medicaid, which he said would only lead to a sense of entitlement among children in the program. Better to let the people do without, he said: “Suffering, if you’re a Christian, suffering is a part of life. And it’s not a bad thing, it is an essential thing in life.”

If Santorum were to win the White House, his health care policies would certainly impose some suffering upon many families with disabled children. And the negative impacts of those policies would be exacerbated if Santorum were able to implement his theologically driven opposition to abortion and birth control. A devout Catholic, Santorum has said that birth control is “harmful to women” and “harmful to our society”—because he thinks that sex should only be a procreative act among heterosexual married people. He thinks the Supreme Court was misguided when it struck down a ban on the sale of contraception to married people in 1965. Presumably, he and Karen have eschewed contraception—and at the age of 48, Karen had Bella.

Were Santorum to deny women, particularly those in their 40s, abortion and contraception, more families—including those of lesser means—would face the severe challenges of raising disabled children. The possibility for serious complications rises exponentially among older women should they forgo contraception. Humans weren’t designed to have children well into mid-life. The risk of having a child with Down Syndrome for a woman in her 20s is 1 in 1,250. At age 45, the risk jumps to 1 in 30. At 49, it’s 1 in 10. Most American women who conceive a disabled child choose to abort. Santorum is certainly free to find fault with this on moral grounds. But if disabled children are gifts from God, as Santorum has said, why make it harder for parents to care for them? More people, too, might forgo abortion if they could be sure that bearing a disabled child would not bankrupt them.

After Santorum mentioned Bella in a debate last fall, people on the campaign trail started asking questions about her. So he made a moving video to let the public have a glimpse of the child who is too medically fragile to join him on the stump. On many levels, the Santorums have a lot to teach us. But what’s missing from their tale is any evidence that their own personal trials have given them insight into other people’s suffering—or compassion for it. Supporting health care reform so disabled children can have a fighting chance at living with dignity can be just as moral as opposing abortion. Yet Santorum seems unable to recognize that the inspiring tale of his own family makes that very case.