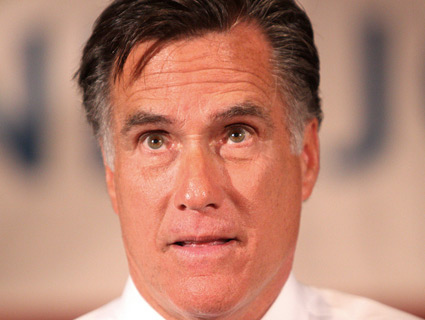 These were some of the headlines accompanying media reports of Mitt Romney’s speech to the Newspaper Association of America on Wednesday. The GOP front-runner’s address was a harsh assault on President Barack Obama and marked another effort on Romney’s part to present himself as the inevitable Republican nominee and to strike at the incumbent president rather than his remaining and hobbling-along GOP primary rivals. But as important—if not more so—as his biting and sarcastic tone was the fact that Romney repeatedly tossed off false accusations against Obama. And he did so—and got away with this—in front of a large audience of journalists.

At the start of his remarks, Romney praised the media—while noting he was sometimes irked by coverage of his campaign—and nobly observed that voters will be “informed by your coverage” and will “hopefully…have an accurate understanding” of the 2012 race and the choice at hand, due to hard-working journalists chronicling the contest. But then Romney went on to hurl a series of utterly untrue remarks.

Here are a few examples:

* In slamming Obama’s stimulus package, Romney declared, “The administration pledged that it would keep unemployment below 8 percent…it has been above 8 percent every month since.” This charge—a favorite on the right—has been debunked repeatedly. Obama never promised to bring unemployment below 8 percent. Two economists on his presidential transition staff produced a report prior to Obama’s inauguration projecting unemployment would fall below 8 percent if Obama’s stimulus were to be enacted. But this projection came with all the usual caveats, and it was written before the full impact of the economic crash under way was realized. (In fact, the stimulus did lift employment as this projection predicted, yet the economic hole was deeper than most economists at the time assumed.) The Washington Post‘s “Fact Checker” has deemed the 8 percent accusation false. Yet Romney and others keep on repeating it.

* Romney blasted Obama for not having any fiscal plan, noting the president has “failed to…propose a serious plan to solve our entitlement crisis.” He added that Obama had “zero” economic ideas. This is absurdly false. The president tried mightily to negotiate a Grand Bargain deficit reduction accord with House Speaker John Boehner. A month after that effort collapsed, Obama proposed a major jobs creation bill and released a 100-page plan outlining his preferred policies for bolstering the economy and reducing the deficit. Romney can oppose these proposals, but it is a blatant misrepresentation to say that Obama has served up absolutely no ideas for economic growth and deficit reduction.

* Romney proclaimed that Obama “is the only president to ever cut $500 billion from Medicare.” Given that Romney supports the GOP-backed Ryan budget that calls for severe slashes in Medicare spending, this is an odd charge. It is also false. As PolitiFact notes, Obama’s “health care law reduces the amount of future spending growth in Medicare. But it doesn’t cut Medicare.” By the way, Obama’s law expanded certain Medicare benefits. The fact checking site also points out that Presidents Reagan, George H.W. Bush, and Bill Clinton each enacted Medicare cuts.

* Romney denounced Obama for “apologizing for America abroad” during his first years in office rather than focusing on the economy. It’s another silly and inaccurate claim. PolitiFact awarded Romney a “Pants on Fire” rating for having made such a statement during his June 2, 2011, speech announcing his presidential bid. But this line obviously plays well for Romney. He has used it over and over.

I could go on, but the drift is clear. Romney’s speech was loaded with false statements. The various fact-checking sites did pounce on Romney for several of his prevarications. AP also ran a story noting that both Obama and Romney had “warped some realities” in recent speeches. But that article failed to note that the examples it listed for Obama had the president (arguably) spinning political characterizations in his favor, while the Romney examples were flat-out untrue assertions Romney made regarding Obama. Once again, a mainstream media outfit was perpetuating a false equivalency.

Romney stood before a gathering of journalists. He made a series of incorrect and dishonest accusations. And he was not hooted out of the room. He faced no penalty for this—just a few slaps from those pesky, fact-checking schoolmarms. He will not be banned from similar forums. The politerati is not up in arms. His campaign rolled on. And this may well sum up one of the fundamental problems with American politics.