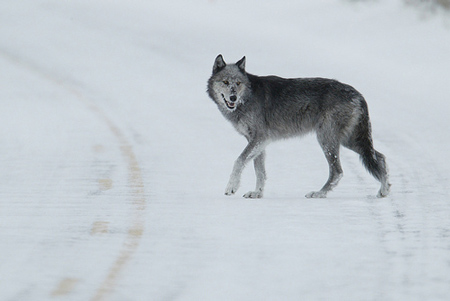 A wolf in YellowstoneOregon State University

Deer have been a blight on suburbia for a while now, munching their way through tract-housing gardens and making some highways extremely dangerous for motorists, as their populations have exploded. (In DC, where they live in abundant numbers in the city’s biggest park, Rock Creek Park, they’re known by neighbors as rats with antlers.) Deer are also radically changing places like the forests of the Adirondacks by devouring young tree shoots from the storied maples and leaving nothing but beech. But a new study finds that it’s not just deer populations that are wreaking havoc on North American ecosystems. It’s all of the large mammals that graze on plants.

Moose, elk, and deer populations are at historic highs, according to an extensive review by scientists at Oregon State University. And they’re taking their toll on young trees, reducing biodiversity of forests and contributing to climate change as a result. The leading cause of the disrupted ecosystems is the disappearance of the predators, namely wolves and bears. Researchers found that large mammal densities were six times higher in areas without wolves than in those with them.

“These issues do not just affect the United States and a few national parks,” said William Ripple, an OSU professor of forestry and lead author of the study, in a statement. “The data from Canada, Alaska, the Yukon, Northern Europe and Asia are all showing similar results. There’s consistent evidence that large predators help keep populations of large herbivores in check, with positive effects on ecosystem health.”

Wolf and bear populations have been decimated by humans who fear them for many reasons, but mainly by ranchers who see them as a major threat to valuable livestock. But humans have been far less successful in dealing with the resulting explosion of big game that’s come as a result. I was in my home state of Utah for the past couple of weeks, where it’s pretty common to find lots of deer alongside the highways, where they cause a lot of car accidents. But this time, i was shocked to pass elk and moose among the road kill, the leftovers of what must have been horrible collisions given the animals’ size. My dad told me that the moose had gotten so out of control that they were hanging out in people’s backyards like domesticated animals.

Hunting, according to the Oregon scientists, is a poor substitute for the efficient wolves and bears, and it doesn’t do much to reduce the herds. (See our slideshow for more on why we need wolves.) In Utah, where hunting is a childhood rite of passage, that’s clearly the case. The moose occasionally get so thick in populated areas that they have to be relocated in other ways.

Back in 2001, I was driving down Parley’s Canyon from Park City to Salt Lake and saw the wreckage of a helicopter overturned in an icy reservoir. The helicopter had hit a power line while trying to airlift a moose, one of 15 to 20 the state was trying to remove from the canyon to improve highway safety, particularly in the run up to the 2002 Olympics, when the traffic was expected to be especially thick. The helicopter crash killed three people. These sorts of stories make a return of the wolf look like a pretty reasonable alternative.