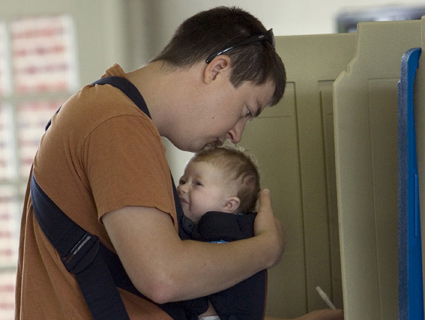 North Carolinians vote today on Amendment 1, a measure that would amend the state constitution—for the first time ever—to ban gay marriage. It’s worth noting that gay marriage is already illegal in North Carolina. But if the amendment passes, which the latest poll suggests it will (with a 55-39 margin), North Carolina will join the 29 other states, including California, Ohio, and Texas, that have amended their constitutions to prohibit marriage between same-sex couples.

But Amendment 1 could also have troubling implications for straight couples. Thanks to the law’s vague wording, critics argue it would likely strip away many of the legal rights associated with domestic partnerships or legal unions.

This is because Amendment 1 says “Marriage between one man and one woman is the only domestic legal union that shall be valid or recognized in this State.” While it’s being called a gay marriage ban, the amendment is more than that—it’s an all-out refusal to recognize any kind of partnership or union that isn’t marriage. So gay North Carolinians, who couldn’t get married anyway, are screwed, and so are straight, unmarried North Carolina couples.

The ACLU of North Carolina released a list explaining how bad things could get for unmarried North Carolina couples if Amendment 1 passes. Here are some rights that could be at risk:

Amendment 1 supporters include state Rep. Larry Brown (R), who said the amendment is something North Carolina voters should decide, and televangelist Billy Graham, who ran a full-page ad in 14 North Carolina newspapers in support of the law. “The Bible is clear—God’s definition of marriage is between a man and a woman. I want to urge my fellow North Carolinians to vote for the marriage amendment,” read the advertisement.

Voters headed to the polls earlier today amid reports of confusion about Amendment 1 and what it does. A Public Policy Polling survey on May 1 whose results showed Amendment 1 leading with 55 percent of voters asked them if they knew what the law was about, and a surprising number of people were mixed up. As the New York Times reports:

The Asheville Citizen-Times quoted one man at the polls who stepped out of his voting box today to ask if Amendment 1 was a vote “for gay rights.”