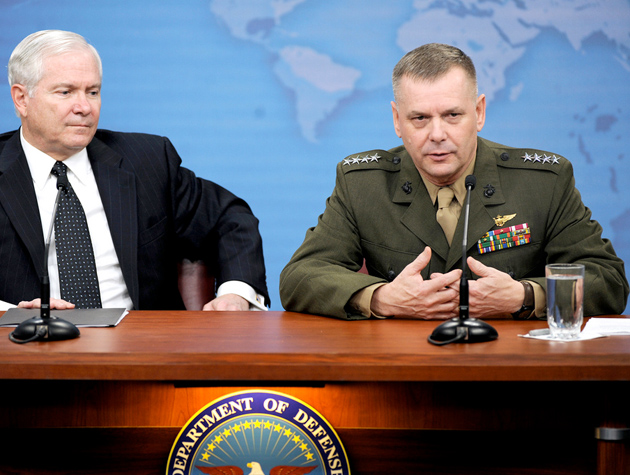 Gen. James Cartwright in 2009, with then-Defense Secretary Robert Gates: National GuardWhen it comes to national security, James “Hoss” Cartwright is probably worth listening to. The four-star Marine general capped off 40 years in uniform with a stint as vice chairman of the Joint Chiefs of Staff, retiring last August. Now Cartwright is weighing in on the size of America’s nuclear arsenal, and not in the way you might expect: He wants the United States to slash its nuclear stockpile by more than 80 percent.

Cartwright was promoting a report by the disarmament policy group Global Zero, also released Wednesday, that proposes the US reduce its nuclear arsenal to 900 warheads. (In its most recent count, the US claimed to posssess 5,113 nuclear warheads.) The report was endorsed by Cartwright, former Republican Sen. Chuck Hagel, a retired NATO general, an ambassador, and an ex-arms negotiator. “For the United States, deterring and defeating aggression in today’s world depends a great deal less on projecting nuclear offensive threat and a great deal more on the skilled exercise of all the instruments of power, both ‘soft’ and ‘hard,'” the report states.

Back in February, I reported on how the Obama administration is considering several proposals to drastically reduce nuclear arms levels. The president is unlikely to endorse the most radical of these proposals—a plan to retain only 300 warheads—but with budget cuts looming and no Soviet bear around to deter, some kind of downsizing is likely.

Of course, Republicans—especially ones with a vested interest in robust atomic arsenals, and the huge defense dollars they involve—are skeptical of such cuts. But they appeared reluctant to voice that skepticism this week, now that a dyed-in-the-wool Marine and Cold War vet like Cartwright has sided with the president.

The sole exception was conservative pundit Max Boot, whose qualifications to discuss national security include sampling the iced lattes at NATO headquarters in Afghanistan. In the ungrammatically named “Unilateral Cuts to U.S. Nuclear Arsenal Only Encourages Enemies,” a blog post so circuitous it must have created a vortex in space-time, Boot lamented Wednesday that no retired generals had come forth to defend massive Cold War-style atomic arsenals, suggesting that they existed but were “afraid” to be called “militarist.” (As a Yale-educated civilian war hawk, you can never go wrong calling lifelong service members cowards.) Boot added that we couldn’t possibly reduce America’s arsenal to 900 civilization-destroying thermonuclear warheads because, well, other countries have some of them: “Perhaps [US nuclear reductions] would be a wise course of action if other nations around the world were eliminating their nuclear arsenals. But that is far from the case.” He pointed to India, Pakistan, China, North Korea, Russia, and possibly even Iran, arguing that even if America were to give up some nukes nobody else would.

It is hard to see how, under those circumstances, a further diminution of the U.S. nuclear arsenal will aid the cause of global peace…Our friends, from South Korea to Saudi Arabia, depend on American nuclear protection.

But it really makes no sense to argue that the prospect of 5,113 mushroom clouds would, say, deter Tehran any better than the prospect of 900 would. (And what nuclear power has its sights even remotely set on attacking Saudi Arabia with atomic bombs?) At the end of the day, as Cartwright and others know, the golden opportunity at hand to dramatically reduce the US arsenal and optimize our national security positioning for the 21st century is undeniable.