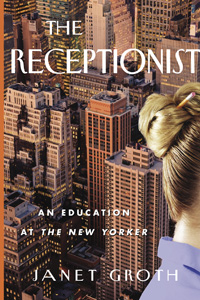 The Receptionist: An Education at The New Yorker

In 1957, New Yorker staffer E.B. White hired 19-year-old Janet Groth, a doe-eyed Midwesterner, as the magazine’s receptionist. For 21 years, Groth was gatekeeper to the literati hub, rubbing elbows with J.D. Salinger, Calvin Trillin, and Jamaica Kincaid while dreaming of publishing her own stuff. In the Mad Men-esque meantime, she marshaled staffers’ wives and their philandering husbands, minded kids and empty houses, and sorted rejected cartoons. For all its intrigue, her graceful memoir aptly portrays the lot of the aspiring writer: self-loathing, loneliness, and a desperate desire to inhabit the literary world.

This review originally appeared in our July/August issue of Mother Jones.