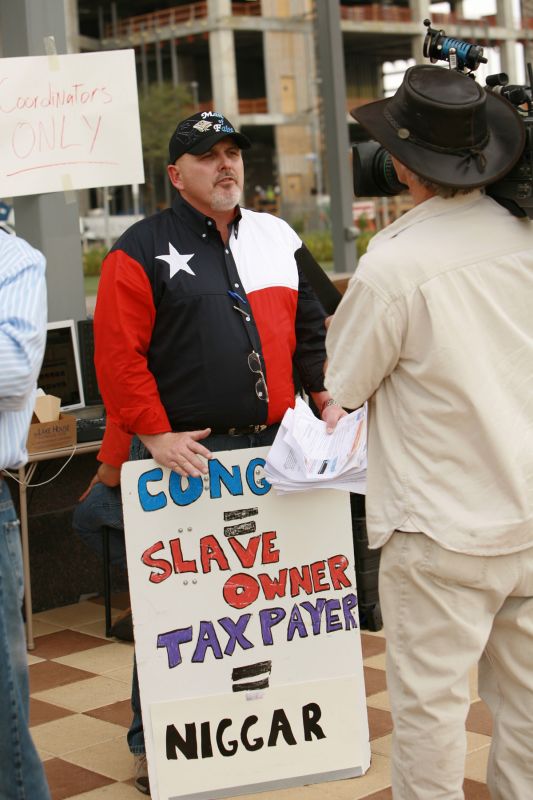 It’s no secret that embattled Wisconsin Gov. Scott Walker (R) has been relying heavily on tea party activists’ labor and donations to bolster his prospects in Tuesday’s recall election. But a recent email from TeaParty.org asking for donations to Walker’s campaign claims that Walker is “one of” the controversial group’s “sponsors”—a claim the Walker campaign vehemently denies.

Even other tea party groups are leery of associating with TeaParty.org. The group, which is also known as the 1776 Tea Party, was founded by Dale Robertson, who famously showed up at a Houston tea party rally in 2009 carrying a sign that said, “Congress = Slaveowner, Taxpayer = Niggar.”

Rally organizers asked Robertson to leave, but someone snapped a photo that has dogged him—and the broader movement—ever since. After the photo of the sign became public, the Tea Party Patriots released a statement denouncing Robertson, emphasizing that it “has never had any association with Mr. Robertson” and stood “firmly” against racism and Robertson’s sign. Robertson’s reputation didn’t improve much when in 2010, he sent out a fundraising appeal with a photoshopped image of President Obama as a pimp.

Like many of the media hounds claiming to represent the grassroots Tea Party movement, Robertson’s main credential is opportunism. In early 2009, as the movement was taking root, he had the foresight to register a whole bunch of tea party domain names, including teaparty.org, Texas Tea Party, Houston Tea Party, HoustonTXTeaParty, and so on. Then he tried to sell the names back to the actual Texas tea party leaders, making veiled threats about lawsuits over their use of the Tea Party name. Most legitimate tea party organizations have put significant distance between Robertson’s organization and their own. In 2010, Adam Brandon, the spokesperson from the tea party group FreedomWorks, told me that Robertson’s outfit was probably the only tea party organization FreedomWorks wouldn’t work with. So Robertson has found some new supporters.

Most recently, Robertson has joined forces with people from the anti-immigrant Minuteman movement, which has fallen on hard times. According to Texas corporate records, TeaParty.org’s executive director is Stephen Eichler and its media director is Tim Bueler, both of whom have extensive ties to the Minutemen movement. Bueler worked briefly with Jerome Corsi on the Swiftboat campaign against Sen. John Kerry (D-Mass.) in 2004.

Corsi and Bueler were deported from Kenya in 2008 for trying to hold a press conference in which they promised to expose close ties between then-candidate Obama and members of the Kenyan government. Corsi is featured prominently on the TeaParty.org site in a section asking people to donate to support a birther campaign against Obama.

Given this background, why would Walker agree to be a “sponsor” of such an organization? Well, as it turns out, he isn’t. The email appears to be an enterprising bit of self-promotion by the tea party group, not the Walker campaign itself. Ciara Matthews, communications director for Friends of Scott Walker, says that TeaParty.org appears to have appropriated one of the campaign’s fundraising emails and distributed it without the campaign’s knowledge. The donation link in the email goes to the Walker campaign, but Friends of Scott Walker “did not authorize the use of our fundraising letter in this way,” Matthews says. “We’ve never spoken to them, we don’t get money from them,” she continued. “We did not provide this fundraising letter to them for the purpose.” No one from Teaparty.org responded to a request for comment.