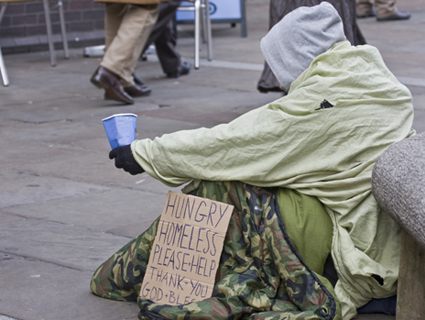 In recent months, several penny-pinched municipalities have taken a stab at eradicating homelessness by making indigence illegal. Cities from Berkeley to Philadelphia to St. Louis have moved to criminalize “acts of living” like sitting, lying down, or asking for change on the corner. In the face of this nationwide crackdown on transients, Rhode Island has decided to take the high road. Its Assembly just passed the country’s first Homeless Bill of Rights, which Governor Lincoln Chafee is expected to sign into law early next week, declaring an equal right to jobs, housing, services, and public space for all inhabitants, whether they have a home or not.

A recent report by the US Interagency Council on Homelessness blasted the national wave of out-of-sight-out-of-mind laws affecting many of the country’s roughly 643,000 street folk: “Criminalization policies further marginalize men and women who are experiencing homelessness, fuel inflammatory attitudes, and may even unduly restrict constitutionally protected liberties.”

Rhode Island noticed. “Discrimination was out of control,” says John Joyce, who lived for years without a roof over his head, and now works with the Rhode Island Homeless Advocacy Project (RIHAP). Cops will kick drifters out of parks, but let students hang out, says Jim Ryczek, Executive Director of The Rhode Island Coalition for the Homeless.

Rhode Island has the second-highest unemployment rate in the country, and is one of the few states without consistent yearly funding for homeless prevention and affordable housing, Ryczek says. According to the Coalition, some 4,140 of the state’s residents passed through the shelter system last year.

So advocacy groups, like the Coalition and RIHAP, along with churches and Brown University kids, launched a big push to get an equal rights law passed. They even held a weekly soup kitchen inside the Statehouse in Providence (hello, public space) to serve legislators a little reality. “The whole idea was to put it in their face: this is homelessness,” says Karen Jeffreys, Associate Director of the Coalition. The bill easily passed the Senate but stalled in the House, where some legislators feared it would strain local governments and police departments.

The Homeless Bill of Rights is no mere feel-good law. On top of ensuring that landlords, employers, health clinics, and police will no longer be allowed to turn up their noses at someone just because she’s address-less, the bill also guarantees confidentiality of personal records, the right to receive voting materials, and the right to privacy of personal property. Even though existing law technically protects many of these rights, according to the National Law Center on Homelessness and Poverty, this is the first time that a state law has identified unequal treatment based on housing status as a form of discrimination, which will allow enforcement through litigation.

“Any society should pride itself in how it treats the least well-off,” says state Rep Christopher Blazejewski, who sponsored the House version of the bill. “We should ensure that they don’t face discrimination on top of everything else that comes with being homeless.”

Joyce sees this campaign as no different from other civil rights movements. “Hopefully people will realize that people without homes are just like anybody else.” He’s optimistic. “I hope things change,” he says. “I’m a big believer in change.”