On August 1, Boston’s Institute of Contemporary Art unveiled this new mural on the side of a building on the Rose F. Kennedy Greenway: 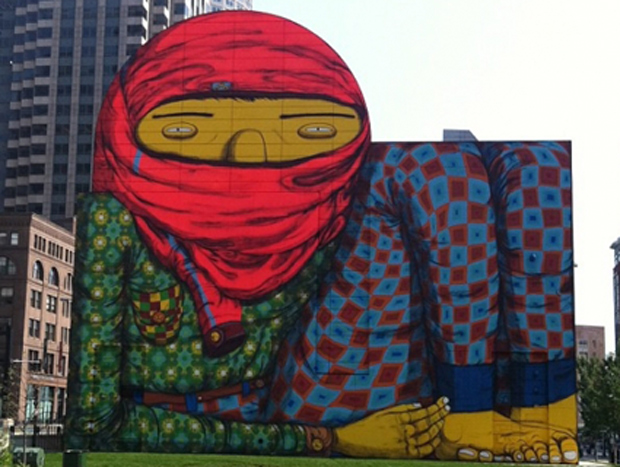 Courtesy of Os GemeosThe mural depicts a boy in a pajamas with what looks like a jacket tied around his head. It accompanies a new exhibit by a Brazilian duo known as Os Gemeos. Maybe you see where this is going?

A vivid mural on the Rose F. Kennedy Greenway in Dewey Square is the subject of some controversy after Fox 25 aired a piece in which passersby told a reporter that the painting resembles a terrorist. The TV station then posted an image of the cartoonish figure on its Facebook page and invited people to comment on it. Several dozen people responded, many of them saying it looks like a Muslim terrorist and urging it be removed.

Or as another critic put it, “I don’t care what it is ‘supposed to be’ or who the ‘artist’ is, it looks like a kid in his pajamas trying to look like an Al Quieda operative.”

The city offers a helpful explanation of the mural, noting that Os Gemeos’ characters “inhabit fantastical, dream-like landscapes of joy and color; other times we see them in more everyday situations—riding the subway, sitting at home with their families or, in the case of the figure on the Greenway mural, just peering at the busy city life unfolding below.” Likewise, “The figures are frequently shown wearing whimsical hats, colorful hoods or scarves—another hallmark feature of the artists’ work.”

So, you know, this is a totally normal mural and everyone should take a deep breath and go back to freaking out about the Red Sox.