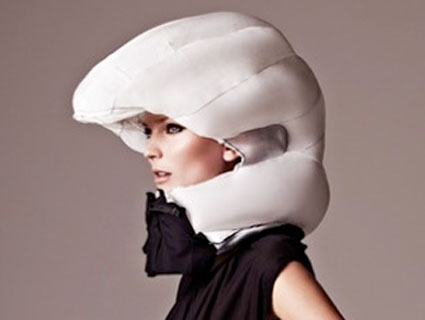 If you’ve ever felt self-conscious about less-than-fashionable bike headgear, you might be in luck. Two Swedish female designers who “wouldn’t be seen dead in a polystyrene helmet” aim to change that. They’ve launched an “invisible bike helmet” that looks like a cute scarf—but upon impact, inflates like an airbag.

I must admit, I find this idea sort of appealing. The first and only time I got hit by a car on my bike, I wasn’t wearing a helmet. I was riding a rainbow fixed-gear near Wannsee, Berlin, on one of Germany’s many bike paths. Few casual cyclists in Europe wear helmets and I was jealous of how chic they looked with their hair flying free. So I, too, ditched my headgear.

But then, ein Auto, backing out of a driveway, knocked some (literal) sense in me. I was only a little banged up, but I put my helmet back on, where it remains to this day. Still plenty of riders here and abroad continue to forego protection for better hair.

There’s only one catch: Right now, the Hövding is only for sale in the European Union. It costs almost 4,000 Swedish Krona (about $600) and needs to be replaced after it inflates. Here’s how it works:

So will it catch on in the US? Not according to Walker Wilkson, service manager at the Bike Rack, a bike store in Washington, DC.

“It seems to me to be a novelty,” he says  “I honestly don’t think it will make more people wear helmets.”

The helmet also contains a black box, which records 10 seconds of data on the bicyclist’s movement patterns around the time of an accident. Right now, the founders are asking that cyclists involved in a crash send them the recording for development work. But in the future, the technology could be useful in solving legal disputes with drivers.

“Having a black box would be great,” Wilkson says. “I know there have been situations, some occurring in DC, where cyclists having video of events prior to and post-accident actually helped them in court.”

That also would have been true in the case of my bike accident. The driver of das Auto blamed me for the crash, despite the fact that she careened straight into my bike lane. If I’d been seriously injured, a video of the accident would have proven useful.

In any case, US cyclists don’t need to pony up for the invisible helmet to get its black box capabilities—as The New York Times reports, cyclists are already strapping video cameras on their heads to fight drivers.