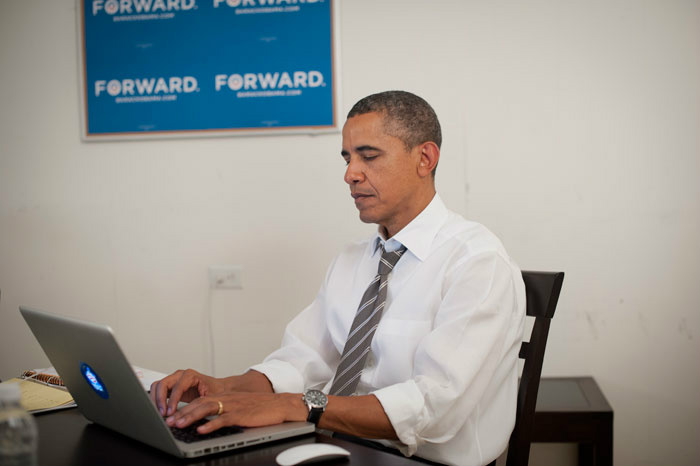 President Obama answering question during his "Ask Me Anything" on Reddit.@BarackObama Twitter feed.

President Obama set the internet aflame Wednesday with his “Ask Me Anything” Q-and-A on Reddit, the massive web aggregator and online community.

Given Mother Jones‘ obsession with super-PACs, dark money, and the mad dash for campaign cash in 2012, one particular question stood out to us: “What are you going to do to end the corrupting influence of money in politics during your second term?”

Obama responded by decrying the “no-holds barred flow of seven- and eight-figure checks” into super-PACs’ war chests. He worried that these outside groups “threaten to overwhelm the political process over the long run and drown out the voices of ordinary citizens.”

And the president made actual news in his response by personally pressing for an amendment to the US Constitution reversing the Supreme Court’s 2010 Citizens United decision, which freed corporations and unions to spend unlimited company funds on independent political spending. Citizens United also helped pave the way for the SpeechNow.org v. FEC decision that ushered in super-PACs. (Members of Obama’s inner circle have previously made similar statements.)

Jonah Minkoff-Zern, an organizer for group Public Citizen’s “Democracy Is For People” campaign pushing for a Citizens United amendment, hailed Obama’s statement. “We’re incredibly excited at Public Citizen that Obama has called for an amendment. We see every day that we organize the passion that people across the political spectrum have for a constitutional amendment to prevent the voices of the many from being drowned out by the money-fueled megaphone of the few.”

It’s no secret that Obama, despite shunning public campaign funds and blessing the super-PAC created to support his re-election effort, dislikes the current big money politics in this country. Indeed, before endorsing the pro-Obama Priorities USA Action, Obama blasted super-PACs—which can accept and spend unlimited sums of money, but ostensibly can’t coordinate with candidates—as a “threat to democracy.”

Hate for the Citizens United decision is common among the higher-ups in Obamaland. David Axelrod, an senior campaign strategist and longtime Obama confidant, told New York magazine back in June that, during a second term, the Obama administration “will use whatever tools out there, including a constitutional amendment” to reverse Citizens United. “I understand the free speech argument,” Axelrod said, “but when the Koch brothers can spend $400 million, more than the McCain campaign and the Republican Party spent last time, that’s very concerning.”

Obama and Axelrod’s constitutional amendment comments aren’t welcomed by all Democrats. Fundraisers, especially those working for outside groups, say these types of comments make their job more difficult. This public anti-Citizens United sentiment “still raises in people’s minds an adverse view at the highest levels [about super-PAC giving] even though the president has said grudgingly said, ‘I hope people will participate in this,'” says one Democratic fundraiser. “If David Axelrod is saying that, donors wonder, ‘Is giving to super-PAC something I’m gonna be appreciated for?'”