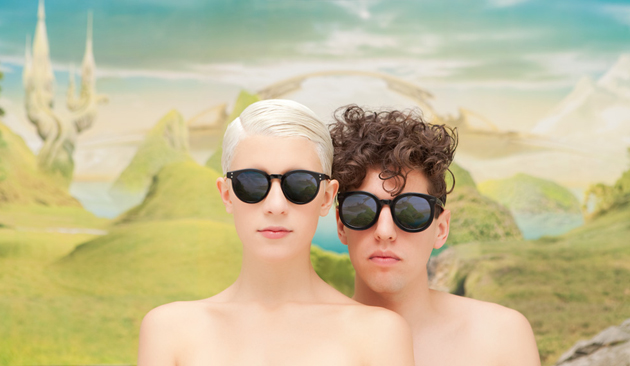 “Oh, this one’s got a real rapid BPM, kids!” yells Claire L. Evans of the band YACHT at a recent festival show in San Francisco. She’s wearing an all-white skintight get-up that accentuates her bleached-white hair—contrasting markedly with the outlandish outline of her metallic blue lipstick—and a massive silver disc necklace carved to display a complete moon-cycle. YACHT’s trademark insignia, a giant yellow triangle happy face, stares placidly from behind her, and the band’s alien electro-pop slowly builds to a crescendo as Evans continues. “That means it has been designed explicitly to help you release anxiety! To help you release stress! To help you to form close personal bonds with other people around you as you move your bodies. Through SPACE!!” The beat crashes, Evans dances frantically across the stage, and the audience loses all semblance of self-control.

Evans is a special kind of performer and YACHT is certainly a special kind of band—a mix of eerily accessible electro-pop seamlessly integrated with a quirky futurist mantra. YACHT (or “Young Americans Challenging High Technology“) was launched in Portland in 2002, the brainchild of Jona Bechtolt (formerly of The Blow), who released three albums on his own seeking to fuse the sounds of technology and traditional pop. In 2008, after they had a “shared mystical experience” in the Texas desert, he joined forces with Evans, who was already a long-time collaborator—and YACHT was reborn. The duo have recorded two albums to date.

Evans was skimming the news one day, she told me, when she saw a headline that caught her attention: “It was something like ‘Monkey Brains Used to Telepathically Control Robotic Hands’ or something similarly outlandish that made me stop and think, ‘Man, what is going on in science?!'”

It was a call to arms of sorts for Evans, who now divides her time between YACHT and writing popular nonfiction about space and “abject” biology. “I realized there was a place for someone like me, who was interested in seeing how the other half lives, and then at least attempting to communicate that reality to people who, like me, were completely unfamiliar with what’s going on right under our noses.”

YACHT’s success as a band has come from Evans and Bechtolt somehow managing to make music that fuses together both of the performers, carving out an otherwise scarcely occupied little niche between science, art, and performance. It’s a matter of complementary skills and ways of thinking, Evans says, but it’s also about not holding themselves back when seemingly outlandish ideas present themselves. Part of this may come from Evans’ musical roots in Los Angeles’ “very outsider, art punk” noise scene, which expanded her view of what music could be in the first place. “In my first band, we’d literally say, ‘We want this keyboard part to sound like a Tyrannosaurus Rex slamming through a forest!’ and go with it. We didn’t even know what we were talking about really, but it gave me a really open-minded view of how one could talk about music.”

The duo recently moved from Portland to LA—which Evans endearingly likens to “a slowly accreting geological strata of weird things that are constantly being built on top of each other simultaneously”—where they’ve just recorded a new song. Though a new album isn’t in the pipeline yet, Evans—in typical fashion—sees a plethora of possibilities. “Ultimately, maybe we kind of aspire to creating our own physical spaces or installations. Maybe real utopias, who knows?”