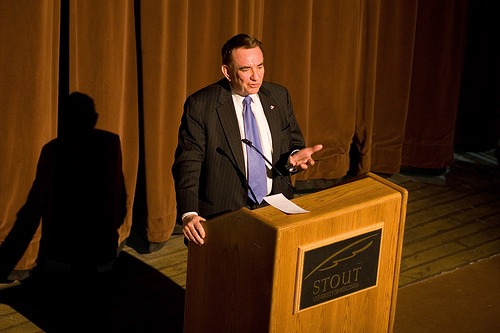 A decade after ending his four-term run as Wisconsin governor, the man known in the Badger State simply as “Tommy” is back in the running. On Tuesday night, Thompson clinched the Republican nomination in the fight to replace outgoing Democratic Sen. Herb Kohl. In November, Thompson will face liberal hero Rep. Tammy Baldwin (D-Wisc.) (whom I profiled here) in the first statewide race of her career.

Thompson is a household name in Wisconsin, but his primary victory was far from a lock. Hedge fund manager and political newcomer Eric Hovde, who dumped more than $5 million of his own money into his campaign, led Thompson in several polls leading up to Tuesday’s primary. Also on the losing end of Tuesday’s Wisconsin primary were ex-congressman Mark Neumann, a tea party favorite, and state Assembly speaker Jeff Fitzgerald.

Democrats would have preferred any of Thompson’s defeated opponents come November. He’s the clear frontrunner, having led Baldwin in three consecutive Marquette University Law School polls this summer—by 8 percent in June, 4 percent in July, and 5 percent in August. His name recognition surpasses that of Baldwin, polls show, and after a career of deal-brokering in Wisconsin and Washington, he is a masterful fundraiser. He’s raised $2.5 million so far this campaign, with $350,000 currently in the bank.

Baldwin, who if elected would be the first openly gay senator in US history, is no fundraising rookie. She’s banked $7.1 million this campaign, and boasts an impressive $3.1 million in the bank. Her own primary night speech on Tuesday made no mention of Thompson. But in a statement, she slammed the former governor as being too cozy with special interests and inside players in Washington. “Tonight, the Republican primary electorate presented Wisconsin voters with a clear choice for the November election,” she said. “Make no mistake, Tommy Thompson will stand with those who already have too much power and influence in Washington.”