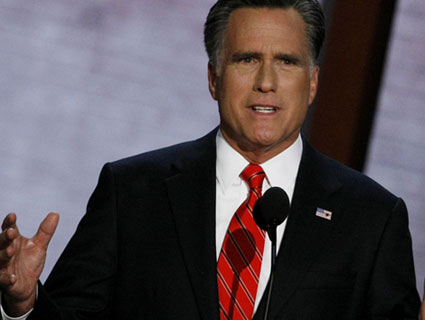 Mitt Romney is still entangled in the mess he created when he failed to reference (let alone thank) the tens of thousands of US soldiers serving in Afghanistan during his speech at the recent Republican convention. His big night in Tampa was mostly overshadowed by Clint Eastwood’s improv act, but his Afghanistan oops also contributed to the bad post-convention bounce for the Romney campaign, with Romney trying to explain the oversight in the days afterward. It’s been particularly intriguing for me to watch this story unfold, given that, as far as I can tell, I was one of the first, if not the first, journalists to note that Romney had inexplicably short-changed the troops in Afghanistan.

And this story does keep unfolding. Last Friday, on Fox News, Romney muffed an attempt to dismiss the matter. He said, “When you give a speech you don’t go through a laundry list, you talk about the things that you think are important and I described in my speech, my commitment to a strong military unlike the president’s decision to cut our military. And I didn’t use the word troops, I used the word military. I think they refer to the same thing.”

That remark only won Romney scorn for implying a thank-you to the troops wasn’t important enough to make his to-do list for the speech.

On Sunday, during a rare appearance on Meet the Press, he tried to brush off the controversy with a laugh and said it is “interesting that people are curious about mentioning words in a speech as opposed to policy. I’ve been to Afghanistan and the members of our troops know of my commitment to Afghanistan and to the effort that’s going on there. I have some differences on policy with the president. I happen to think those are more important than what word I mention in each speech.” Once again, he was suggesting a direct reference to the troops and a statement of gratitude would not be significant.

With such clumsy statements, Romney has done little to stop the assaults. And the attacks have come from his own side. About two hours after Romney strode off the stage in Tampa, neocon commentator Bill Kristol posted a piece on the Weekly Standard‘s website decrying Romney for ignoring US servicemembers in Afghanistan. It was scathing:

The United States has some 68,000 troops fighting in Afghanistan. Over two thousand Americans have died in the more than ten years of that war, a war Mitt Romney has supported. Yet in his speech accepting his party’s nomination to be commander in chief, Mitt Romney said not a word about the war in Afghanistan. Nor did he utter a word of appreciation to the troops fighting there, or to those who have fought there. Nor for that matter were there thanks for those who fought in Iraq, another conflict that went unmentioned…What about the civic propriety of a presidential nominee failing even to mention, in his acceptance speech, a war we’re fighting and our young men and women who are fighting it? Has it ever happened that we’ve been at war and a presidential nominee has ignored, in this kind of major and formal speech, the war and our warriors?

Two hours earlier, I had a similarly visceral reaction as I watched Romney’s speech in the arena. As he neared the end, at 11:11 pm, I tweeted, “Number of times Mitt Romney mentions Afghanistan or the troops there: 0. #rnc2102.” A minute later, I followed up with this tweet: “100K or so US men and women serving in Afghanistan, and they don’t get a shout-out from the man who wants to be commander-in-chief. #rnc2012.” I was flabbergasted Romney had not included the obligatory mention, and I mentioned this aloud, perhaps a bit loudly, to those in the press stand near me.

Josh Rogin, the excellent reporter and blogger for Foreign Policy, who was sitting in the adjoining seat, amplified my observation with his own tweet at 11:13: “No mention of the tens of thousands of troops fighting and dying in the ongoing war in Afghanistan.” Within a minute, Marie Harf, an Obama campaign aide who covers national security issues (and who follows Rogin on Twitter), sent out a tweet similar to Rogin’s: “Mitt Romney did not mention Afghanistan once tonight. We have tens of thousands of US troops fighting there right now. #priorities.” And at 11:16, she sent out a tweet signaling that Obama campaign officials quickly knew they had potent ammo: “It is offensive that Mitt Romney did not mention Afghanistan or veterans once in his speech tonight. #priorities.” (Shortly after the speech, I referred to Romney’s unforced error on Hardball.)

By the next morning, the Obama campaign was on Romney’s case, releasing a web video that slammed Romney’s speech and noted, “And at a time when 84,000 Americans men and women are fighting for their country in Afghanistan—not a single mention of how, or when, to bring them home safely.”

Romney’s omission was so glaring—and so dumb—that it was guaranteed to become a problem for him. After all, both Kristol and I had the same gut response. Once Romney didn’t say what he should have said, he was in trouble. Any one tweet or blog post or press release could have ignited the inevitable storm.

Romney is scheduled to address the National Guard Association on Tuesday. Perhaps by then, he’ll finally have a better response. No doubt, many reporters and pundits will be watching—and tweeting.