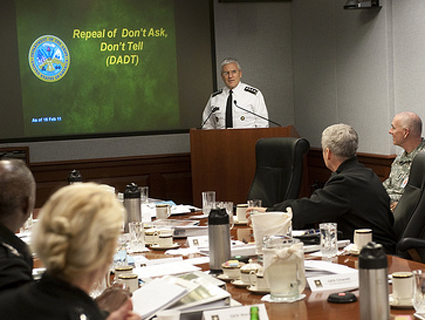 A new study on the impact of repealing the US military’s Don’t Ask, Don’t Tell policy found no negative impact, despite dire warnings from supporters of the ban on allowing gays and lesbians to serve openly

The study, which was conducted by the pro-repeal Palm Center and was first reported on by Lila Shapiro of the Huffington Post, found no negative impact on military readiness, unit cohesion, retention and recruitment of servicemembers, and morale. The Palm Center conducted “in depth interviews” with 62 active-duty servicemembers as part of the study, which mirrors recent findings by the Pentagon itself. In May, Defense Secretary Leon Panetta, commenting on DADT’s repeal, told reporters: “It’s not impacting on morale. It’s not impacting on unit cohesion. It is not impacting on readiness.” He added, “very frankly, my view is that the military has kind of moved beyond it.”

The Palm Center also attempted to contact opponents of repeal, including 553 of the 1,167 retired military officials who signed a letter saying ending Don’t Ask, Don’t Tell would “break” the military, as well 22 “known public opponents of DADT repeal.” In both cases, the vast majority those who had opposed repeal declined to be interviewed.

Among those contacted by the Palm Center was Senator John McCain (R-Ariz.), whose final, angry jeremiad against repeal on the Senate floor warned that allowing gays and lesbians to serve openly would “harm the battle effectiveness which is so vital to the survival of our young men and women in the military.”

There’s no evidence that the Republican establishment has changed its position on Don’t Ask, Don’t Tell, despite the fact that opponents’ dire predictions have not yet come to pass. The 2012 GOP platform states that “We reject the use of the military as a platform for social experimentation and will not accept attempts to undermine military priorities and mission readiness.” The language suggests the GOP is still committed to reinstating Don’t Ask, Don’t Tell despite the absence evidence that allowing gays and lesbians to serve openly has had any negative consequences at all.