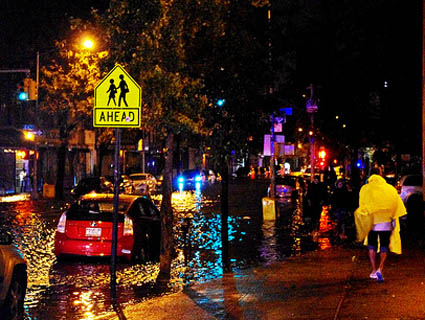 Political science research shows that natural disasters can be a boon or an albatross to incumbent politicians. It all depends on how they react. Strangely enough, however, there’s evidence that politicians don’t get credit for spending money preparing adequately for a potential disaster—just for spending to alleviate disasters’ effects.

That dynamic sets up some “perverse incentives,” according to Stanford professor Neil Malhotra, who co-authored a 2009 study with Loyola Marymount professor Andrew Healy on the politics of natural disasters. “The government might under-invest in preparedness measures and infrastructure development in exchange for paying for disaster relief, since there are no electoral rewards for prevention,” says Malhotra. “Since 1988, the amount of money the U.S. spends on disaster relief has increased 13 times while the amount spending on disaster preparedness has been flat.”

The worst part is that preventative spending, Malhotra says, reinforces the old Ben Franklin saying that “an ounce of prevention is worth a pound of cure.” It really is more effective to spend money on getting ready for a natural disaster than trying to mitigate its effects after the fact. “We estimated that $1 in preparedness spending is worth $15 in relief payments in preventing future disasters,” Malhotra says.

That’s something to keep in mind as Mitt Romney hastily rebrands his campaign events as “hurricane relief” rallies and Barack Obama sends out photographs of himself coordinating the federal government’s hurricane response: Politicians get much more credit for their reaction to disasters like Sandy than they do for trying to ensure disasters don’t cause so much damage in the first place.