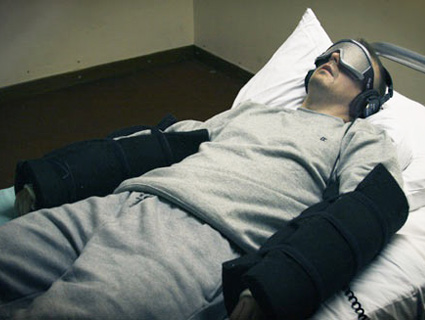 The experiences of prisoners held in solitary confinement—the despair, the disorientation, the hallucinations—are well documented, but laboratory observations of isolated human subjects and the profound effects of extreme confinement are exceedingly rare, in part because such experiments might have trouble getting past institutional review boards these days. But that wasn’t the case during the ’50s, when Donald O. Hebb, a professor of psychology at Montreal’s McGill University, set out to study how sensory isolation affects human cognition.

Hebb had previously examined the effects of visual deprivation in rats as a doctoral candidate at Harvard University. In 1951, he secured a $10,000 grant from the Canadian Defence Research Board to expand his research to human subjects. The results were dramatic. Depriving a man of sensory input, he soon discovered, will break him in a matter of days.

Hebb’s experiments went well beyond the level of isolation prisoners typically experience in solitary. He offered male graduate students $20 a day—excellent pay for the time—to stay in small chambers containing little more than a bed. “It would be a bit more than a meter wide and a couple of meters long, probably enough for a table or something,” recalls Peter Milner, one of Hebb’s former graduate students who is now an emeritus psychology professor at McGill.

At the time, Milner was working on another project for Hebb, but he saw the sensory deprivation rooms firsthand. “They were given food by human beings, and also when they needed to use the washrooms and things they would be escorted there by other human beings. So they weren’t completely alone,” Milner says. He recalls watching as the subjects were led down the hall to the bathroom clad in frosted-over goggles. “They wore goggles and earphones and [there was] some sort of noise, just white noise, from a loudspeaker,” he says.

Prone in their isolation rooms, the volunteers also wore gloves and cardboard tubes over their arms to limit their sense of touch. A U-shaped pillow covered their ears and the hum of an air conditioner further obscured outside noise. “According to his theory, the brain would deteriorate if it didn’t have a continuous stream of sensory input,” Milner told me. “It was really just a test of this theory, which in any case didn’t really hold together much, although these sensory deprivation experiments tended to support it.”

Hebb had reportedly hoped to observe his subjects for six weeks. As it turned out, the majority lasted no more than a few days in isolation—and none more than a week. “Most of the subjects had planned to think about their work: Some intended to review their studies, some to plan term papers, and one thought he would organize a lecture he had to deliver,” wrote Woodburn Heron, one of Hebb’s collaborators, in “The Pathology of Boredom,” a 1957 Scientific American article describing the experiments. “Nearly all of them reported that the most striking thing about the experience was that they were unable to think clearly about anything for any length of time and that their thought processes seemed to be affected in other ways.”

“The subjects had little control over the content” of their visions, Heron wrote. “One man could see nothing but dogs, another nothing but eyeglasses of various types.”

A series of cognitive tests showed that the volunteers’ mental faculties were, in fact, temporarily impaired. While in isolation, for instance, the subjects were played tapes arguing that supernatural phenomena, including ghosts and poltergeists, were real; when interviewed later, they proved amenable to such beliefs. They performed poorly on grade-school tasks involving simple arithmetic, word associations, and pattern recognition. They also experienced extreme restlessness, childish emotional responses, and vivid hallucinations. “The subjects had little control over the content” of their visions, Heron wrote. “One man could see nothing but dogs, another nothing but eyeglasses of various types, and so on.”

Nor were their hallucinations merely visual: One volunteer repeatedly heard a music box playing; another heard a full choir accompanying his vision of the sun rising over a church. “One had a feeling of being hit in the arm by pellets fired from a miniature rocket ship he saw; another reaching out to touch a doorknob in his vision felt an electric shock,” Heron wrote.

Inspired by Hebb’s work, D. Ewen Cameron, head of McGill’s psychiatry department during the 1950s, began employing sensory deprivation as part of a technique called “psychic driving,” his unsuccessful attempt to “reprogram” the minds of mentally ill patients, some of whom later sued Cameron, according to Milner. In 1956, Cameron wrote in the American Journal of Psychiatry that he would hypnotize his schizophrenic patients “under stimulant drugs and after prolonged psychological isolation.”

Cameron’s experiments were torture, Milner told me, because unlike Hebb’s volunteers, Cameron’s subjects were entirely under his control. “They were sick people,” he says. “They came to him because they had a mental illness, and his job was to cure them. If they had been day patients they would have not bothered to come back. But because they were hospitalized there wasn’t much the patient could do. Hebb thought it was not only stupid, but rather wicked. And he was right.”

Hebb and his collaborators, Milner says, never intended to advance techniques that could be used to soften up prisoners.

Hebb’s work wasn’t driven entirely by academic curiosity. There was a concern during the 1950s that the Soviets were using sensory deprivation to brainwash Canadian POWs in Korea, and the McGill researchers viewed their own work—some of which the Canadian government forbid Hebb from publishing—as an attempt to understand sensory deprivation so that some sort of defense might be devised against it. Yet this type of knowledge was famously put to use as part of the Bush-era program of “enhanced interrogation” (a.k.a. torture) of US detainees. As The New Yorker‘s Jane Mayer has reported, psychologists versed in techniques of “Survival, Evasion, Resistance, and Escape”—a military program wherein soldiers were exposed to extreme conditions, including isolation, that they might encounter as POWs—were enlisted to advise interrogators at Guantanamo Bay. According to Mayer’s sources, they essentially “tried to reverse-engineer” SERE techniques to extract information from enemy combatants.

In any case, there’s a big difference between voluntary isolation, however extreme, and the situation in which thousands of American prisoners find themselves today—stuck in tiny cells for an indefinite length of time with minimal human contact and no clear process by which they might earn their way out. “The really scary thing,” noted Sara Shourd, one of three Americans taken captive by Iranian forces in 2009, in a recent interview with Mother Jones‘ James Ridgeway, “is that the US government and many governments were very critical of Iran for holding me in solitary for 13 and a halfmonths, but when I got out I was shocked to find that the US had more people in solitary confinement than any other country—and in this country it is used routinely as an administrative practice, not as a very last resort.”

Read about the Fox Reality show where contestants were held in isolation—for a chance at $50,000.

A previous version of this article was published in 2008.