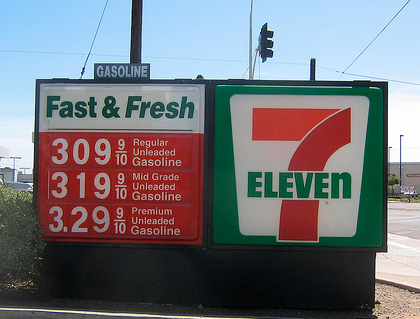 As Election Day draws near, Mitt Romney continues to hammer President Obama on high gas prices in states like California—never mind how little say presidents actually have in the matter. But according to a recent national survey, prices, while still higher than last year, have been in decline these past two weeks—particularly in battleground states like Ohio and Wisconsin. And although Hurricane Sandy might drive up prices in the short term, experts say the storm could actually drive down gas prices further in the coming weeks.

“In the US, we produce about 8.5 million barrels of crude oil a day. During Sandy, we’re likely to see demand reduced by 1-2 million barrels a day, and that final number will be dictated by the magnitude of the storm,” says Avery Ash, AAA’s manager of regulatory affairs.

Oil refineries in New Jersey and Pennsylvania have scaled back production in anticipation of the storm. But unlike Katrina, Sandy isn’t slamming a major refining region. Instead, it’s hitting the East Coast, which makes up a large portion of US demand but relies on refineries in the Midwest, or imported gasoline. “So you’ve got some supply issues, but in the longer term you’ve got ‘demand destruction’ bringing prices down. The question is when these two factors will balance out,” Ash says.

If Hurricane Sandy’s “demand destruction” effect combines with factors such as lower seasonal demand and a recent drop in crude oil prices, Americans could be looking at cheaper gas by November 6. Whether such a late-breaking shift could help Obama at the polls is anybody’s guess. Writes Clifford Kraus of the New York Times:

Most of the states that have the highest gas prices—California, New York, Oregon, and Washington—are Obama strongholds. And most of the states with the cheapest gas prices tend to be Southern and Romney strongholds, like Texas, Louisiana, Oklahoma, Mississippi and Alabama…So while gasoline prices make for an easy line of attack in a debate or stump speech, it remains to be seen whether they will influence the election outcome.

Rick Newman, chief business correspondent for US News and World Report, counters that falling gas prices in swing states could ultimately help the president, because they “have an outsized effect on consumer psyches.”