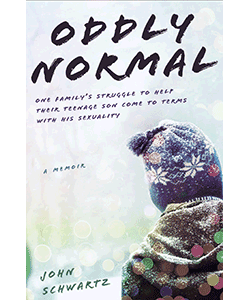 Oddly Normal: One Family’s Struggle to Help Their Teenage Son Come to Terms with His Sexuality

Joe, the youngest son of New York Times reporter John Schwartz, grew up playing with Barbies, BeDazzling his toys, and ransacking his big sister’s jewelry box. Schwartz knew his “fabulous five-year-old,” sashaying around the house in pink light-up shoes, was different, but was he gay? Eight years later, when Joe came out, his schoolmates took the news in typical middle-school fashion—horribly. It wasn’t long before the boy tried to kill himself with a Benadryl overdose. Equal parts memoir and reportage, Oddly Normal chronicles the Schwartz family’s mistakes, heartaches, and triumphs in raising a child coming to grips with his sexuality.

This review originally appeared in our November/December issue of Mother Jones.