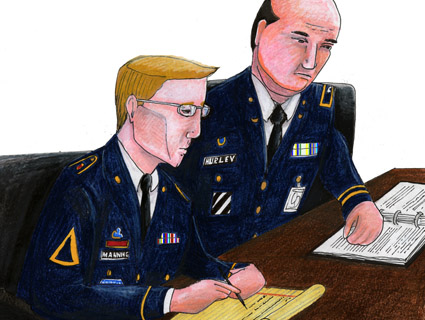 A courtroom drawing of Pvt. Bradley Manning with one of his lawyers, Maj. Thomas Hurley.<a href="http://www.flickr.com/photos/clarkstoeckley/8204008115/in/photostream">Clark Stoeckely</a>/Flickr

Army Private Bradley Manning, who is accused of leaking thousands of classified documents to WikiLeaks, testified yesterday in Fort Meade, Maryland for the first time since his arrest in May 2010. As Mother Jones reported earlier this week, his court-martial trial officially begins in February, but this week’s pretrial hearings have focused on his defense team’s motion to dismiss his case based on “illegal pretrial punishment”. Manning’s lawyers assert that while he was held in a Quantico, Virginia prison from July 2010 to April 2011, he was subjected to unnecessary and unlawful treatment including extended solitary confinement, being forced to wear a rash-inducing smock, and sentenced to harsh suicide prevention watch.

Courthouse News Service‘s Adam Klasfeld is one of the few reporters to cover the hearings since they began in December 2011. Last night I talked with him about what he observed during Manning’s first day of testimony. Below are audio clips from the interview.

Regaining Composure: Klasfeld describes Manning’s first few nervous moments on the stand and his eventual regaining of composure when describing his treatment.

Coming to America: Following his initial detention in Kuwait, Manning was flown to Quantico, Virginia. However, at the time he had no idea where he was headed and even expected to land in Guantanamo or Djibouti. “He was very excited to be landing in BWI,” says Klasfeld.

An Eight-by-Six Cell: Manning’s attorney, David Coombs, used white tape to outline an eight-by-six-foot box on the courtroom floor, which served as a representation of Manning’s cell in Quantico. “It hammered it home to match it with the physical layout of what eight-by-six looks like,” says Klasfeld.

No One to Trust: Manning’s defense team set up the idea that he had no one to trust while in Quantico. His guards and psychologist were feeding him conflicting information, which led him to become withdrawn—an emotional state that led to his continued “prevention of injury status.” Note: Master Sergeant Blenis was a prison guard at Quantico and Captain Hocter was Manning’s psychologist. “He’s getting totally contrary reports…”

Suicide Watch: Manning’s withdrawn nature was led prison officials to continue watching him to make sure he did not harm himself. Note: The “underwear” remark refers to a comment Manning made in which he told prison officials he could hang himself with the waistband of his underwear.

A Rift With His Father: Manning also testified that his father disobeyed his wishes not to talk with the press. After visiting Manning, his father spoke to PBS’s Frontline. Manning then revoked his visitation rights. “It was pretty heartbreaking,” says Klasfeld.

Manning took the stand for a second time today and was cross-examined by the prosecution. His testimony as part of this hearing is now complete. A ruling on this motion will be made sometime before February, when his trial is scheduled to begin.