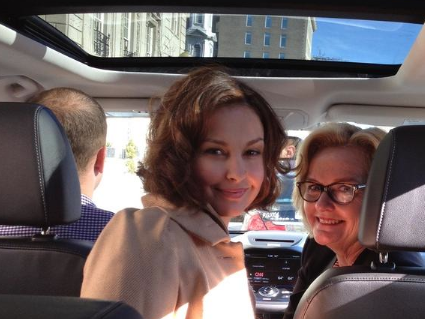 The surest sign yet that Ashley Judd might actually run for Senate? She’s starting to talk like she might actually run for Senate. On Saturday, the actress and activist told guests at the Bluegrass Ball in Washington, DC that she was “certainly taking a close look” at challenging Sen. Mitch McConnell (R-Ky.) in 2014. She didn’t, however, answer a Politico reporter’s question about gun control legislation—a subject that other red-state Democrats like West Virginia Sen. Joe Manchin and Montana Sen. Max Baucus have also avoided. So on Sunday, I put the question to her again at a brunch reception for EMILY’s List, the organization dedicated to support pro-choice female Democratic candidates.

Judd didn’t take the bait: “I really enjoyed—I was very proud of the Vice President’s role on that,” she said. “I liked the consultation and the full voice of people across the spectrum of opinions and ideology about it. I thought focusing in particular on video game creators was important. And I hope that there will be buy-in.”

Thus concluded the Mother Jones Ashley Judd interview. Of course, the biggest hint that Judd is seriously considering a run might just be how she exited the brunch EMILY’s List brunch—carpooling with Sen. Claire McCaskill (D-Mo.):