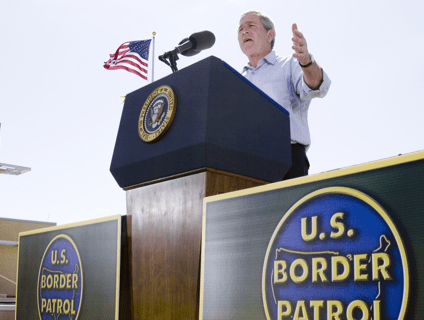 Carlos Gutierrez was Bush’s secretary of commerce when the 2007 immigration bill crashed and burned. “It was on the one hand talk radio, on the other it was these groups: FAIR and NumbersUSA, Center for Immigration Studies,” Gutierrez says, naming several restrictionist groups founded by anti-immigration activist John Tanton. “We were getting it all over the place.”

Now those same groups are gearing up to stop bipartisan immigration reform again.

Mark Krikorian, the head of the Center for Immigration Studies, which supports very strict limits on immigration, thinks reformers will run into trouble once as soon as they present an actual bill. “They say no military plan survives contact with the enemy,” he says. “Well, it’s going to be a similar situation. Once the bill is actually presented, it’s going to have hundreds and hundreds of provisions in it, many of which are going to be unacceptable to lots of Republican and even independent voters.”

Republicans supportive of immigration reform intend to play it better this time. The push for reform is coming from sections of the party that have historically been supportive of reform, like conservative religious groups and the business community. But future Republican presidential hopefuls such as Rep. Paul Ryan (R-Wis.) and Sen. Marco Rubio (R-Fla.) have gotten on board, too. Rubio, who had been working on his own plan before joining the Gang of Eight, spent the last two weeks on the right-wing talk radio circuit getting approval for his comprehensive immigration reform plan from the likes of Sean Hannity, Mark Levin, and Laura Ingraham, despite a general similarity to what Obama has previously proposed. When Rubio went on Limbaugh’s show Tuesday, Limbaugh told him, “What you are doing is admirable and noteworthy.” Lou Dobbs, a former CNN anchor now at Fox Business who spent the better part of the last decade praising wannabe border vigilantes and falsely portraying undocumented immigrants as carriers of leprosy (not a metaphor), said Rubio’s plan was “a rational, effective, humane response to the issue.”

There’s money behind the GOP pro-reform effort, too. Charles Spies, a Republican operative who cofounded the Mitt Romney super-PAC Restore Our Future and helped raise millions for Romney’s campaign, started a new super-PAC last November with Gutierrez to support skittish Republicans worried about primary challenges from the right on immigration.

“In the past all [Republican candidates] had to consider politically was an attack from their right flank,” Spies says. “Now they know they have an organization that can come in and support them if they’re attacked.” Republicans for Immigration Reform has only just begun raising money, though, and Spies says that for now he expects it won’t start spending its cash until the 2014 election season.

Most GOP members of Congress haven’t said whether they support the Senate plan, but some have already come out against it. Sen. Ted Cruz (R-Tex.) a potential 2016 presidential contender, was part of a meeting of immigration reform opponents in the Senate last week. On Monday, he released a statement expressing opposition to the Senate plan because it would grant a path to citizenship for undocumented immigrants. National Review published an editorial Wednesday staunchly opposed to any path to legalization for undocumented immigrants, writing, “Take away the Spanish surname and Latino voters look a great deal like many other Democratic constituencies.” In other words, legalizing undocumented immigrants will only help Democrats win elections.

Limbaugh may have praised Rubio, but he also left himself plenty of room to oppose immigration reform and blame Democrats for marring the Florida senator’s good works. If Limbaugh turns against the bill, other talk radio hosts, including many if not all of those who seem to have lined up with Rubio, will follow Limbaugh’s lead. And then the whole effort could be back where it was last time around. “There’s a lot of Republicans fearful that Barack Obama will march out at the end take credit for it, and say, ‘Look at those evil bastards—I barely kept them from sealing the borders with lava,'” says a Republican consultant.

The conflicts within the Republican Party over immigration aren’t the only threats to comprehensive reform. Making the path to citizenship too onerous could doom liberals’ and Democrats’ support for it. Contentious issues like how the law treats same-sex spouses and future foreign workers could divide Democrats and the left, too. “There’s going to be things in there that are going to be objectionable to members of both parties,” says Ira Mehlman, a spokesperson for the Federation for American Immigration Reform (FAIR), one of the groups Gutierrez says helped kill immigration reform last time and will try to do so again.

Using the specifics of an immigration reform bill to divide its supporters is a strategy that’s worked before. But immigration reform advocates contend that the times have changed. “They’re trying that strategy and it’s not breaking through—their strategy of trying to kill the whole policy by picking it to pieces,” says Lynn Tramonte of the pro-immigration reform group America’s Voice.

Gutierrez says that he’s more optimistic about reform than he was the first time around. “There is a better chance [of passage] than [last time],” Gutierrez says, but it’ll be anything but easy. “In the past it’s been the anti-immigration-reform side who seem to have a system together, a way of pushing Congress. People who want immigration reform have to step it up.”