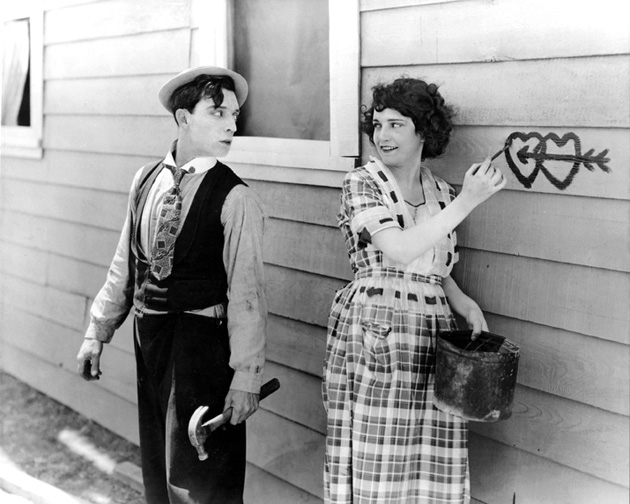 Silence. Silence? From a roomful of six young children? And then, without warning, peals of laughter and exclamations and a frenzy of competing comments. Repeat.

Across the room, I was trying to socialize with the grown-ups and not be rude, but my attention kept straying over to the TV, where we were previewing a series of rare and hilarious Buster Keaton shorts that Bay Area residents can catch on Saturday at the San Francisco Silent Film Festival’s “Silent Winter“—a one-day program at the Castro Theatre.

The coolest thing is that the whole program will be scored live—no tUne-yArds, alas, but still you get to hear Donald Sosin on grand piano, Chris Elliot on the Mighty Wurlitzer, and the Mont Alto Motion Picture Orchestra.

We loved all the Keaton shorts, including One Week, from 1920, where a jilted suitor sets out to foil the construction of a newlywed couple’s new home. The Play House, from 1921, includes various theater foibles and fiascos. One self-referential gag that reminded me of Being John Malkovich involves a theater program where Buster Keaton appears on screen as more than one character simultaneously—a visual trick that was a lot harder to pull off in those days. But our favorite was 1920’s The Scarecrow, which had everybody in hysterics. Housemate buddies compete for the same girl, while a stern father and a mad dog do their best to thwart the transaction.

A few nights earlier, my wife and I had screened My Best Girl, a delightful 1927 love story by Sam Taylor. A poor, innocent, lowly retail stock girl (Mary Pickford in her last silent role) falls for a new young hire, who it turns out is the son of the store’s wealthy owner working incognito. He falls for her, too. But, well, he’s already got a rich fiancée. You can see where all of this is going, but it’s heartwarming anyway, and Pickford is a total charmer.

Also on the program are the 1916 version of Snow White that reportedly inspired a 16-year-old Walt Disney, the 1926 surrealist German film Faust, and 1924’s The Thief of Bagdad, for fans of really, really retro special effects involving flying carpets and sea monsters.

So come out, bring your kids—at least to the Keaton shorts—and enjoy the moving pictures the way your grandparents did. Tickets and schedule here.