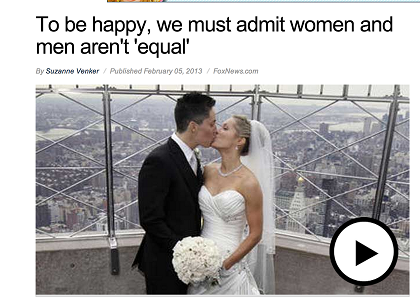 The culture wars are as American as apple pie. According to Suzanne Venker, author of “How to Choose a Husband and Make Peace with Marriage,” one of the more pressing issues in modern culture is the dissolution of traditional gender roles. The culprit, Venker argued in a recent column for Fox News, is feminism.

“Feminism didn’t result in equality between the sexes,” Venker wrote, “it resulted in mass confusion. Today, men and women have no idea who’s supposed to do what.”

The most immediate irony of the piece as originally published was its inclusion of an image of a newlywed lesbian couple, apparently by accident. The photo was of Lela McArthur and Stephanie Figarelle of Anchorage, Alaska, according to Buzzfeed. The image has since been removed, but Venker’s arguments against sexual equality deserve their own response.

To illustrate her point that men and women are confused in their currently nebulous gender roles, Venker looks at the wreck of the cruise ship Costa Concordia. After the disaster, dismayed passengers talked of the lack of a “women and children first” policy, describing men pushing past them on their way to safety.

I will grant Venker this: Men and women are indeed different, biologically at the very least. Few people believe otherwise, even while acknowledging that gender itself is a social construction. While some gender roles, such as giving birth to a child, are defined by our biology, most are defined by our culture. These roles shift over time; they evolve and adapt to the realities of our economy and technology and worldview.

According to Venker, while men and women are often capable of doing the same things, they don’t necessarily want to. “That we don’t have more female CEOs or stay-at-home dads proves this in spades,” she argues, blithely ignoring the historical factors at play in this division of labor.

Venker argues that this confusion stems from a population raised on divorce. Marriage is no longer a priority, she argues. Instead we are now taught to “honor sex, singlehood, and female empowerment.”

Divorce may be a problem in its own right, but Venker conveniently leaves out the darker history of marriage, including the legality of marital rape. Raping one’s spouse wasn’t fully outlawed in the United States until 1993 when North Carolina removed an exemption from its rape laws for spouses. (Finland didn’t make marital rape illegal until 1994, and it is still legal in some parts of the world.)

If divorce has become a problem, it’s a problem which stems from a much longer history of women treated as property rather than as equals. If we truly want to strengthen marriage, we’ll need to do so precisely by honoring “female empowerment.”

If men and women are confused about their roles in today’s society, it’s because we’ve been forced to reconcile the history of inequality with a future we hope will be better for both sexes. Masculinity may indeed be undergoing a crisis of its own, but that’s just a symptom of growing pains, not some nefarious illness brought on by the advent of feminism.