Ten years later, the Bush administration’s projected price tag for the war in Iraq seems downright cute. According to the first-ever comprehensive count of the true toll of the combined wars, the estimate the administration used to sell the invasion in 2003 was about 100 times too low. 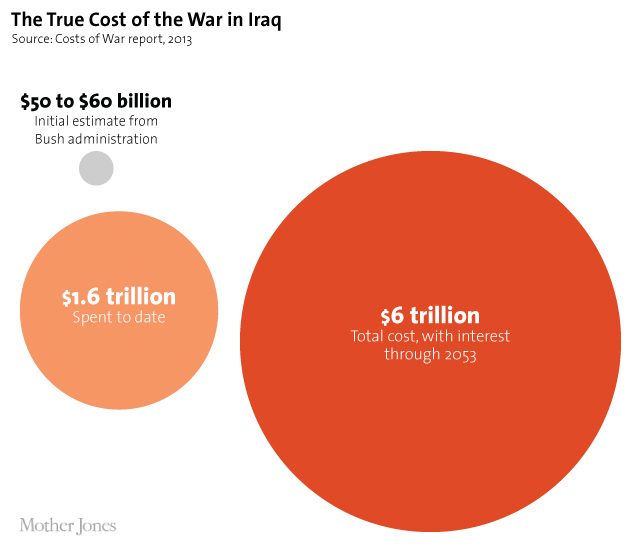 So what did that $6 trillion get us, exactly? Since we borrowed to pay for much of the war, we’re facing nearing $4 trillion in cumulative interest between now and 2053, according to the 30 researchers who worked on the “Costs of War” report for Brown University’s Watson Institute for International Studies.

To date, according to the report, medical and disability claims of US war veterans of Iraq have reached $84 billion; ongoing care for wounded Iraq war vets and their families is expected to require nearly $500 billion more over the next several decades. Homeland Security got $245 billion in additional funding thanks to increased threats of terror—real, imagined, and staged—over the last 10 years. On-the-ground operations alone ended up being 16 times more expensive than the Bush Cabinet’s original estimate for the entire enterprise.

Apparently the Office of Management and Budget was really, really bad at math for a while there in 2003. 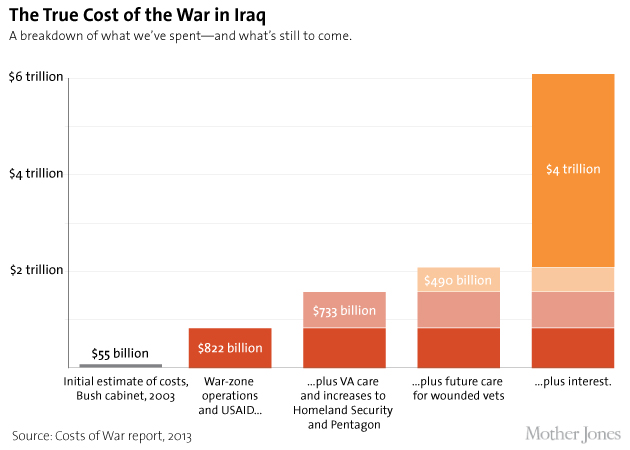 And of course, hundreds of thousands of lives have been lost, damaged, and tragically altered in the meantime. The “Costs of War” report estimates 134,000 Iraqi civilians have been killed, cautioning that the real number could be four times higher. As Reuters put it, “the report concluded the United States gained little from the war, while Iraq was traumatized by it.”

The war reinvigorated radical Islamist militants in the region, set back women’s rights, and weakened an already precarious healthcare system, the report said. Meanwhile, the $212 billion reconstruction effort was largely a failure with most of that money spent on security or lost to waste and fraud, it said.