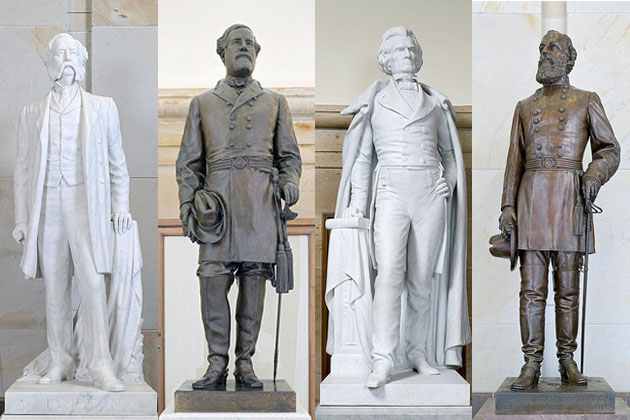 Update, 6/24/2015: On Tuesday, with momentum continuing to build against the public display of Confederate iconography, Senate Majority Leader Mitch McConnell (R-Ky.) proposed removing the statue of Confederate president Jefferson Davis from his state’s capitol. (So did Matt Bevin, the state’s Republican gubernatorial nominee.) The debate has even spread to Washington. Senate Minority Leader Harry Reid (D-Nev.) told reporters on Tuesday “we need to make sure the states understand who they have” in Statuary Hall. Read below for the original story on the US Capitol’s white supremacist problem:

When a statue of civil rights icon Rosa Parks was unveiled in the Capitol’s Statuary Hall in late February, it joined an exclusive club. The collection includes generals and statesmen, inventors and priests—as well as some of the most notorious leaders of a five-year armed insurrection that left 600,000 people dead in the name of protecting white Americans’ rights to own black Americans as slaves. What all the people portrayed in Statuary Hall have in common, with few exceptions, are two things: They are white, and they are men.

There is one Latino represented in the collection today. There are six American Indians, one Hawaiian, and zero African Americans. (Parks and Martin Luther King Jr. are both featured as part of a separate collection.) If it were any less diverse it would look like the Senate. But if the Architect of the Capitol is uncomfortable with the composition of its collection, it has an odd way of showing it. The biographies of the collection’s most notorious members make no mention of their hard-earned legacies perpetuating and reinforcing a culture of white supremacy.

According to Hilary Shelton, the Washington director of the NAACP, the collection’s biographies amount to a “whitewash” of history.

“It becomes revisionist when they don’t talk about the real context in which these struggles that are going on,” Shelton told Mother Jones. “We would not want to see them edit it out either. But we would like to make sure that there is a clear understanding of what was going on in the country at those times.”

Alexander Stephens, the vice president of the Confederacy and one of two Georgians in the collection, is described in his official bio as “a dedicated statesman, an effective leader, and a powerful orator.” But his most famous oration, the 1861 speech in which he explained that that the South’s “foundations are laid, its cornerstone rests, upon the great truth that the negro is not equal to the white man,” goes unmentioned—as do all of the blemishes on his record. The biography make no effort to explain how someone whose singular legacy split the country in half might be considered a statesman.

Representing the South Carolina delegation is former Senator, Vice President, and Secretary of War John C. Calhoun—who blocked the annexation of Mexico on the grounds that only white people could be free—and Wade Hampton, a Confederate cavalry commander best known for expediting the end of Reconstruction in his state through a paramilitary organization known as the Red Shirts, who massacred black voters. On his Capitol résumé, Hampton is described as “a symbol of South Carolina politics,” glossing over the bloody tactics that made him so.

As journalist Nicholas Lemann documented in Redemption: The Last Battle of the Civil War, “an anti-Reconstruction historian later estimated that 150 negroes were murdered in South Carolina during the [1876] campaign, while the Democrats’ official leader…was campaigning as a statesman.” 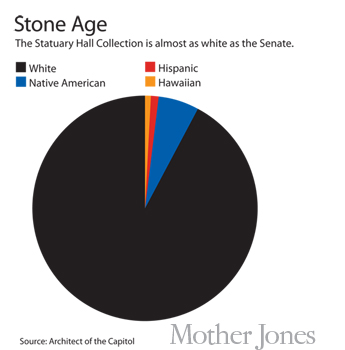 The composition of Statuary Hall hasn’t changed much since its inception.

The state of North Carolina notes that Statuary Hall inductee Charles Brantley Aycock, “reacting to what he viewed as abuses of the political system during Reconstruction, endorsed the idea that politics should be reserved for the white race”—something he followed up on by working “closely with legislators to disfranchise black voters by means of literacy tests, poll taxes, and the ‘grandfather clause.'”

Zebulon Vance, who governed the state during the Civil War and joins Aycock in the Capitol, built his reelection campaign in 1876 on the platform of taking the state back from blacks. As one biographer put it, “His assumption that whites were racially superior to blacks was so deeply ingrained that he often found himself unable to express his point in any other terms.”

A spokeswoman for the Architect of the Capitol did not respond to a dozen requests for comment about the biographies, including emails, phone calls, and an in-person visit to the AOC office in the basement of the Senate.

The impediments to changing the ratio on Capitol Hill include: Congress, state legislatures, the Architect of the Capitol, basic laws of physics, and two and a half centuries of American history. The principle push to update the statues has come from one woman—Lynette Long, president of the Chevy Chase, Maryland-based organization Equal Visibility Everywhere.

“What happened was I took a tour of the Capitol and I said to the guide, ‘How many women are there?'” recalls Long, who works by day as a marriage counselor. “And she said very proudly, ‘Nine! We have Helen Keller now.’ And I’m like, ‘Nine!?'” She immediately began contacting state legislators asking them to consider updating their collection. But so far, she hasn’t had much luck.

The origins of the controversy are pretty simple. In 1864, Congress asked each state to contribute two famous figures from its history for the new Statuary Hall collection. The first attempt to break up the boys club lasted just a few days. In 1921, one year after women won the right to vote, Congress unveiled a sculpture in the Capitol Rotunda to honor a trio of suffragettes. The installation featured busts of Susan B. Anthony, Lucretia Mott, and Elizabeth Cady Stanton, rising out of a white granite slab as if, contemporaries suggested only half in jest, they had just emerged from a bath.

The women were quickly relocated to a locked basement storage known as “The Crypt,” and the sculpture was promptly defaced by order of Congress; its epigraph—”Woman, first denied a soul, then called mindless, now arisen, declared herself an entity to be reckoned”—was considered too “blasphemous” for public display.

And that’s more or less how things stayed for the next three-quarters of the century. Three efforts to remove the women from the basement failed, and a request to expand each state’s quota to three famous figures was shot down by the Architect of the Capitol, who argued that the room simply couldn’t support the weight of the additional stone. Finally, in 2000, Congress reached a compromise. States wouldn’t get three statues, but they could replace pieces they no longer liked.

But efforts to adjust the imbalance have largely fallen short. In 1993, the Florida House of Representatives voted to replace their statue of Confederate General Kirby Smith—famous for mostly being one of the last Confederate general to surrender in 1865—with World War II hero James Van Fleet. But the plan was knocked down in the state Senate after a lobbying effort by the Sons and Daughters of the Confederacy. (Florida’s other statue, in case you were wondering, honors the inventor of air conditioning.) 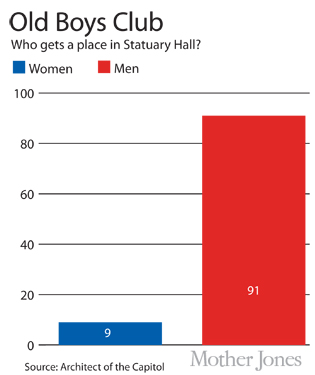 In recent years, Arizona, California, Iowa, Michigan, and Ohio have passed legislation to update their statue collection—with white men Thomas Edison, Barry Goldwater, Norman Borlaug, Gerald Ford, and Ronald Reagan, respectively. Kansas approved a proposal to replace its roster with Dwight D. Eisenhower and an actual lady, Amelia Earhart. But while the Eisenhower statue has already been installed, the Earhart statue hasn’t even been funded.

Meanwhile, it took Washington, DC, years of lobbying before finally receiving permission to put in statues of Frederick Douglass and Pierre L’Enfant—but the celebrated abolitionist and the city planner were consigned to the lobby of a nearby federal office building. A GOP congressman argued (unsuccessfully) that the District should only be allowed to install one statue, on account of the fact that it’s not a state. Only in 2012 did Congress allow Douglass to move to the Capitol building—but not Statuary Hall.

“If you don’t include people like Frederick Douglass that very clearly should be represented…we are truly again missing the full picture,” Shelton says. “We end up missing depth and dimension.”

Even the Mott, Stanton, and Anthony bust, which has been in the Rotunda since 1997, almost never left the basement—because a trio of female GOP lawmakers objected to the roughly $75,000 price tag. When Congress finally did take the necessary steps to return the suffragettes from the Crypt, Sen. John Chafee (R-R.I.) threatened to block the move—and relented only after getting assurance that his home state icon Roger Williams’ removal would only be temporary.

Although the Architect of the Capitol won’t weigh in on its website’s historical gaps, it has offered an explanation for why it’s so resistant to change. “It would just be a logistical nightmare, and it might very well be at the whim of the state legislature as it passes from control of one party to another,” Architect of the Capitol spokesman Philip Viles told NBC in 1999 when asked about the prospect of states modernizing the collection.

For Long, the road to change has been a bumpy one. She scored her first major victory last spring, when Maryland Gov. Martin O’Malley signed a bill to commission a sculpture of Harriet Tubman, to eventually be placed somewhere in the Capitol. But it’s only a first step; Congress still needs to draft and pass legislation permitting the statue to be installed—and the state still needs to pay for it, something that’s easier said than done in the era of austerity.

“If you walk in there you think we did nothing in this country, and it’s really sad to see that,” Long says. “It looks the same as it did 100 years ago, and that’s sad. Young girls need to see they can do something.”