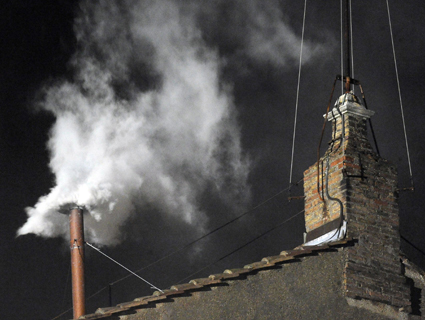 We have a winner. On Wednesday, about an hour after white smoke emerged from the Sistine Chapel, Cardinal Jorge Mario Bergoglio was formally announced as the new head of the Catholic Church, replacing the recently retired Pope Benedict XVI.

So what does it mean for the Church? We have no idea—we don’t write for the National Catholic Reporter. But John Allen Jr., who does, has a pretty useful quick guide to Bergoglio that is worth checking out. This part stood out:

Bergoglio is seen an unwaveringly orthodox on matters of sexual morality, staunchly opposing abortion, same-sex marriage, and contraception. In 2010 he asserted that gay adoption is a form of discrimination against children, earning a public rebuke from Argentina’s President, Cristina Fernández de Kirchner.

Bergoglio was considered a top candidate for the job the last time there was a conclave, in 2005, when he was subjected to this bit of last-minute research. Here’s the Associated Press press reported it:

Just days before Roman Catholic cardinals begin meetings to select a new pope, a human rights lawyer filed a criminal complaint against an Argentine mentioned as a possible contender, accusing him of involvement in the 1976 kidnappings of two priests.

The complaint filed in a Buenos Aires court Friday accused Bergoglio, the archbishop of Buenos Aires, of involvement in the kidnappings of two Jesuit priests by the military dictatorship, according to the Buenos Aires newspaper Clarin.

The bar for Worst Pope Ever is pretty high; here’s hoping Pope Francis I comes nowhere near it.