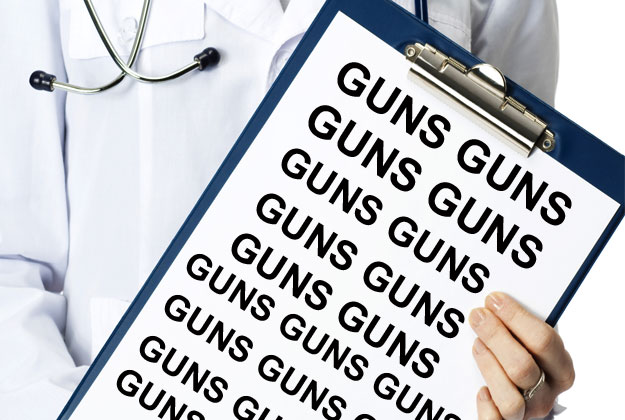 South Carolina’s youngest state representative, 24-year-old Joshua Putnam, recently proposed a bill that would ban most health care providers from asking whether their patients own guns. Its purpose is to fend off a nonexistent Obama plan to register all gun owners and possibly take away their weapons. “We don’t want the federal government to come down and hold any Medicaid or Medicare dollars over our heads if doctors don’t give up information about their patient’s guns,” says Putnam. “We want to protect physicians and we want to protect the citizens.”

It’s one among a recent wave of similar pro-gun legislation that doctors say could be detrimental to their patients. That pushback from medical professionals has made at least a few Republicans skittish: Three of the South Carolina bill’s cosigners dropped off this month.

Introduced in January, Putnam’s bill prohibits doctors from asking about a patient’s firearm ownership. It makes exceptions for cases in which a patient is being treated for an injury related to a gun, has a history of mental health issues, or in which there is evidence of child or adult abuse. Putnam says the bill is modeled on an NRA-backed amendment that Senate Majority Leader Harry Reid (D-Nevada) tried but ultimately failed to add on to Obamacare in 2010, which aimed to assuage gun-owners’ fears that the administration would use the health care law to collect information about gun owners and use it against them.

But in states including South Carolina, Florida, Missouri, Montana, West Virginia and Oklahoma, this type of legislation has seen some momentum since the Newtown massacre. Fifty-four Republican state representatives (and zero Democrats) have signed on to Putnam’s bill, even though it’s based on a debunked conspiracy theory.

“Physicians are interested in [keeping] our patients alive and allowing them to live longer, and part of that has to do with gun violence,” says Dr. William Begg, an emergency room physician in Danbury, Connecticut, who treated victims of the Sandy Hook Elementary School massacre. Rather than encouraging doctors to tell their patients about the well-documented health risks of owning guns, Begg warns that legislation like Putnam’s “makes it easier for health care providers to remain silent for fear of reprisal.”

In the three months since Newtown, state lawmakers around the country have already introduced nine bills aimed at blocking the sharing of gun information in a medical context, according to the Law Center to Prevent Gun Violence. Unlike the controversial legislation that was introduced in Florida last year, known as “docs vs. Glocks,” Putnam’s law would not mete out financial and licensing penalties if a doctor asks about guns. But a recent report from the American College of Surgeons argues that this kind of legislation nonetheless amounts to a gag order. “It is important that the relationship between a physician and a patient not be compromised,” wrote author Alexis Macias.

Columbia pediatrician Deborah Greenhouse suggested in The State that supporters of such legislation were being hypocritical. “They are trying to get Big Government to come in and dictate what we can and cannot say, while at the same time, they are trying to tell Big Government to stay out of their right to own guns,” said Greenhouse, who is president of the S.C. Chapter of the American Academy of Pediatrics.

WATCH: Powerful testimony from Dr. Begg and the parents of Newtown victims.

Putnam says that with local doctors now speaking out against the bill, he plans to amend it so that doctors can still hand out pamphlets about gun safety. But, he adds, “citizens shouldn’t be asked about things that aren’t medicine. If I drive my car too fast, if I don’t wear my seatbelt, if I go bungee jumping, are we going to have a checklist of things doctors have to ask that’s not related to an illness?”

Begg says health care providers should think about guns differently now. “Before the Sandy Hook massacre I believe it was socially unacceptable to discuss gun violence with patients in the same category as morbid obesity, texting and driving, seat belts, tobacco use, safe sex, or excessive alcohol.” Now, he says, “Any patient that comes in that has some suicidal thoughts, I will double check that myself, or the crisis team will ask about guns in the home.”

Some of Putnam’s own colleagues have since been persuaded by the doctors, including Chip Huggins, one of three Republican state representatives who asked this month for their names to be removed from the legislation. “The doctors are concerned about safety. And any time doctors call me, it concerns me, because they’re very conservative people, and I’m a conservative person,” Huggins says. “I think this is something we need to go back and keep studying.”