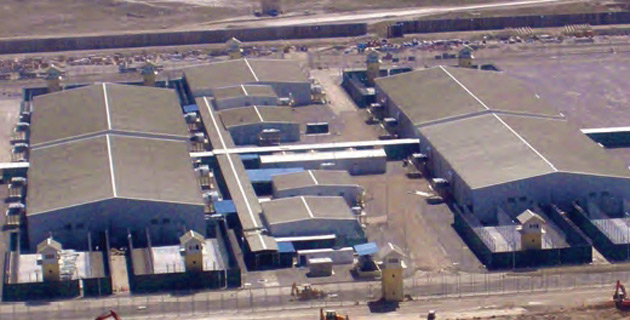 An aerial shot of the Parwan Detention Facility in 2009.<a href="http://en.wikipedia.org/wiki/File:Aerial_view_of_the_new_Bagram_Theater_Internment_Facility.jpg">US Army Corps of Engineers</a>

On Monday, the US military handed over the Parwan Detention Facility (a.k.a. the Bagram military prison) to the Afghan government. It was the last prison in Afghanistan still under American control. The transfer ceremony took place at the detention facility—renamed the Afghan National Detention Facility at Parwan—as US Secretary of State John Kerry made a surprise visit for talks with Afghan President Hamid Karzai. Gen. Joseph Dunford, the top American commander in Afghanistan, was in charge of transferring the facility at the ceremony.

Afghanistan has taken full control of Bagram military prison from the United States, as US-led forces wind down more than a decade of war.

The handover on Monday follows an agreement reached after a week of negotiations between US and Afghan officials, which includes assurances that inmates who “pose a danger” to Afghans and international forces will continue to be detained under Afghan law…The United States last year agreed to hand over responsibility for most of the…detainees at the prison to Afghanistan and held a transfer ceremony in September.

US soldiers remained at the prison, however, and controlled the area around it.

The detention center, located near the US-run Bagram military base north of Kabul, holds over 3,000 prisoners, the vast majority of whom were already under Afghan control. About three dozen non-Afghan detainees will stay under American control. Transfer of control has been one of messier issues of contention between Kabul and Washington as most US forces prepare for an exit in 2014. Though the facility never enjoyed the same kind of name recognition as Abu Ghraib or Guantanamo, it was at the center of major controversies and allegations of torture and human rights abuses. Here is some essential background on the detention center and the Bagram air base: