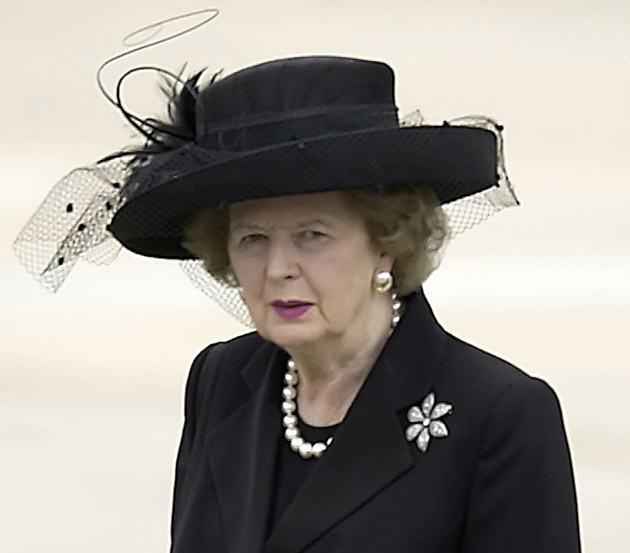 For a lot of young liberals just coming of age, the 1980s were tinted by a certain malaise owning to the lingering cultural backdrop of Ronald Reagan and British Prime Minister Margaret Thatcher, who, as if you didn’t already know, has died at the age of 87. Our consolation prize, of course, was that all that angst inspired a lot of great, often angry, and sometimes even danceable music (see just below) that became the soundtrack for my generation and came to define the era almost as much as the pols we put in charge. (Well, I didn’t put ’em in charge: In 1984, the first election in which I was eligible to vote, I cast for Mondale, who got walloped by the incumbent Reagan.) Thatcher and Reagan alike were ideal targets for musicians, from folk to punk to reggae. I pulled out these seven notables. Why not 10? Hey, I’m no conformist!

1. The English Beat, “Stand Down Margaret”:  From the flipside of I Just Can’t Stop It, the Beat’s first record, which I listened to pretty much constantly in high school. I still have it on vinyl, suckers! Here’s a live rendition. Wow, those clothes! I’d, like, totally forgotten.

2. Crass, “How Does It Feel (to Be the Mother of a Thousand Dead)?” — This isn’t actually a video at all. The English anarcho-punk band Crass, as its fans well know, was way too anti-commercial for any of that corporate BS. But you could always depend on them for strident protest music. Because we were kids, after all, and youth is strident. This song was Crass’ response to the Falklands invasion.

3. Frank Turner, “Thatcher Fucked the Kids”: Okay, this isn’t from the 1980s at all. Frank Turner only pretty recently passed 30 (Don’t Trust Him!). No, he’s totally great, so there. Here’s a short profile, if you’re interested. This older (2008) tune is pretty self explanatory.

4. Linton Kwesi Johnson, “It Dread Inna Inglan”: On his debut LP, Dread Beat an’ Blood, the dub poet Linton Kwesi Johnson, who usually sets his rhyming creations to dub tracks, pressed a track of himself speaking by megaphone at a rally for George Lindo. Lindo was a black man in his 20s who was framed by police in Bradford, England, for a robbery. He was later freed and received compensation for his ordeal, according to the Guardian, which profiled Johnson. Listen to the original track here. In addition to Dread Beat an’ Blood, I’d recommended Johnson’s albums Bass Culture and Forces of Victory—also key parts of my high school soundtrack.

5. Pete Wylie, “The Day That Margaret Thatcher Died”: So I actually never heard this one way back when, or at least I don’t remember it. But you know a lot of people are going to hear it today. Here’s a live supergroup version. The sound quality is pretty godawful, but you’ll get the general idea:

6. The Clash, London Calling: Okay, I’ll go out on a limb and say much of the Clash’s later career was in some ways a response to Thatcher’s England—much in the same way that X came to define 1980s Los Angeles (for me at least). London Calling came out the same year Thatcher came to power. In the clip below, frontman Joe Strummer screws up the title track’s opening lyrics. (Clearly Thatcher’s doing.)

By the way, if you know of any songs celebrating Margaret Thatcher, I’d love to hear about them in the comments. (For some reason, when people write songs about conservative heroes, they end up being stuff like Item 3 in this post.)