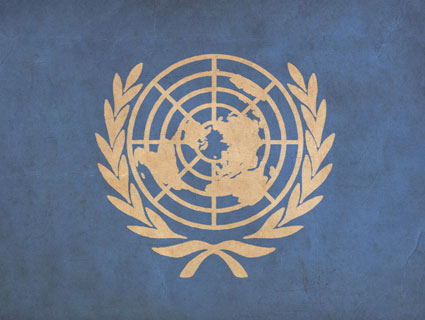 After more than a decade of efforts to regulate the $70 billion international arms trade, the United Nations’ General Assembly on Tuesday adopted the Arms Trade Treaty despite opposition from human-rights abusers around the world and the United States gun lobby.

Contrary to the rhetoric from the National Rifle Association and other opponents, the treaty doesn’t dictate domestic gun laws in member countries. It requires signatories to establish controls on the import and export of conventional arms including tanks, missile launchers, fully automatic assault rifles, and other weapons of war. Many countries, including the United States, already have laws regulating such exports, but before the treaty’s passage on Tuesday there had never been an accord setting international standards.

“It’s a big victory for the human rights community,” Frank Jannuzi, a deputy executive director with Amnesty International USA, told Mother Jones. “It shows that it can fight back against the gun lobby.” Amnesty has spent nearly two decades working with Oxfam International and other human rights organizations to get international arms trade regulations in place.

The NRA and other gun groups strongly opposed the treaty, capitalizing on conservative myths that it would infringe on Second Amendment rights by undermining the country’s sovereignty. But the gun lobby’s real opposition to the treaty is probably economics. The US is the world’s leading arms exporter, and gun dealers aren’t eager to be required to report weapons exports that may wind up in the hands of warlords or terrorists overseas.

GOP senators like Rand Paul (Ky.) are still repeating the false claim that abiding by the treaty would lead to an international registry of American gun owners and “full-scale gun CONFISCATION.” Conservatives have also argued that the treaty violates the Second Amendment by recognizing the rights of governments, but not their citizens, to self-defense, even though it has no international policing mechanism and explicitly recognizes the “inherent right of all States to individual or collective self-defence.”

Although the Obama administration supports the Arms Trade Treaty, US law stipulates that international treaties must be ratified by a two-thirds vote of the Senate. There’s no chance that will happen. In March, the Senate approved a budget amendment to “uphold Second Amendment rights and prevent the United States from entering into the United Nations Arms Trade Treaty.”

That hasn’t tempered Jannuzi’s elation. “I think that [the treaty] will, at a minimum, force every country to scrutinize those exports in terms of the likely human rights impact.” More than 50 countries that lack any export controls, he said, now have an obligation to adopt them. Jannuzi is also hopeful that the US will still be responsive to the treaty despite Senate opposition, pointing to our country’s recent involvement in bringing African warlord Bosco Ntaganda before the International Criminal Court despite never ratifying the Rome Statute.

Iran, North Korea, and Syria were the only three nations to vote against the treaty; 154 voted in favor and another 23 abstained. Iran and Syria claimed that the treaty didn’t go far enough to keep weapons out of the hands of non-state actors and other aggressors; North Korea said limitations on importers would infringe on nations’ rights to self-defense. Amnesty has condemned the “abysmal human rights records” of all three nations, reporting that they have all “used arms against their own citizens.”