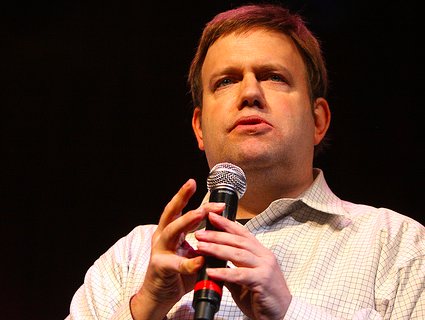 Following Mother Jones‘ publication of remarks GOP message man Frank Luntz made to University of Pennsylvania students about conservative talk radio, Luntz has decided to withdraw funding for a university scholarship named after his father that sends students to Washington, DC, according to the Daily Pennsylvanian, an independent student newspaper at the school.

While Luntz is scheduled to speak on a panel at the University during graduation weekend, he said that he would never return to speak after this incident, and would discourage others from speaking here.

He also added that he would not renew a scholarship in his father’s name for students to travel to Washington, D.C.

A student had asked Luntz a question about political polarization, and Luntz had responded by blaming conservative talk radio, saying, “They get great ratings, and they drive the message, and it’s really problematic.” Luntz had asked for his answer to be off the record, and although the student who asked the question agreed to those terms, Aakash Abbi, the student who made the recording and provided it to Mother Jones, did not.

In an op-ed for the Daily Pennsylvanian, Abbi outlined his reasoning for making and leaking the recording, explaining that “in a room filled with scores of independent students, ‘off the record’ is not a Patronus charm. Luntz may have felt that he was invited to speak candidly by acclimation, but I disagreed entirely.”

Frank Luntz has made a very successful career out of advising Republicans on the content of their message. He was asked one of the most important questions of the day in terms of American politics (“what is causing extreme polarization between the parties?”), and refused to speak freely. Why? Because doing so may harm his commercial interest. And this attitude is at the root of the problem. If influential GOP figures like Frank Luntz truly believe that the party’s media kingmakers harm the national interest but refuse to say so for fear of backlash, they knowingly work against the spirit of open and honest debate.

In other words, the people creating the “chilling effect” on discourse are not students like Abbi, but the very people Luntz was afraid to go on the record criticizing in the first place.