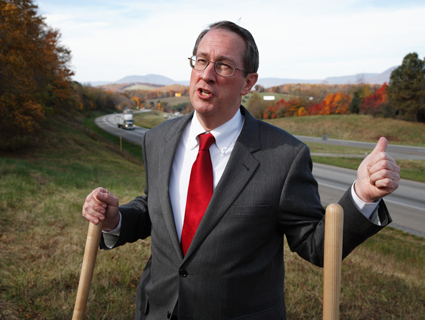 Enviros hoping for details on President Obama’s promised biofuel push got a few answers yesterday in the president’s new budget, which still left some questions as to how the administration plans to pay for expensive new biofuels research. The budget indicates the Interior Department may charge the fossil fuel industry more to drill on public lands, a plan that already had Republicans bristling when the president hinted at it last month.

In mid-March, in a speech at Illinois’ Argonne National Lab, Obama pitched an Energy Security Trust, which would collect $2 billion in additional revenues by 2020 from oil and gas companies that drill on federal land, and invest the funds in R&D for cutting-edge biofuels and clean vehicles. According to the Interior Department, these royalties totaled roughly $7.9 billion in FY 2012.

The speech left unclear the question of how an additional $2 billion in royalties could be raised without either raising royalty rates—a non-starter for the fossil fuel industry—or allowing more drilling on more public lands. A White House spokesman was quick to rule out expanded drilling in Alaska, but left the possibility elsewhere. A Climate Desk calculation reviewed by MIT-based energy blogger Jesse Jenkins found that to raise an additional $2 billion in royalties through expanded drilling alone, oil and gas development on public land would need to increase by 1.5 percent and 7.2 percent, respectively, by 2020.

Deans had hoped that today’s budget would clear things up. While the proposal doesn’t mention the Energy Security Trust by name, it calls for unspecified adjustments to royalty rates that The Hill reports would be redirected from the general treasury toward the Trust. An Interior Department spokesperson said that annual oil and gas income to the government is projected to rise by $2.8 billion by 2023, but was unsure whether this money would come from new public land drilling or solely via increased royalties.

The budget also carves out $2.3 billion for the Energy Department’s Office of Energy Efficiency and Renewable Energy, which oversees R&D on advanced biofuels (as well as solar, wind, and other clean energy research), but doesn’t specify how much of that would go toward biofuels specifically, or whether these funds are in addition to the $2 billion for the Energy Security Trust. A White House spokesperson did not return repeated calls for comment.

If Virginia’s Congressman Bob Goodlatte (R) has his way, it could be a moot point: Goodlatte introduced a bill yesterday that would bar biofuels from comprising more than ten percent of the nation’s gasoline supply. That was the mix limit enforced by the EPA until 2010, but the agency has begun to relax enforcement of the restriction, allowing for the sale of gas with up to fifteen percent ethanol. But Goodlatte’s bill would set the ten percent cap in stone by limiting how much of the nation’s biofuel supply can go to fuel; it would also eliminate federal rules that require gasoline producers to use ethanol. Goodlatte claims his bill could help livestock producers by easing corn prices that were pushed to record highs by recent drought—prices that, incidentally, also hurt the ethanol industry.

At a press conference in Washington yesterday afternoon, Goodlatte, joined by co-sponsors Representatives Jim Costa (D-Calif.), Steve Womack (R-Ark.), and Peter Welch (D-Vt.), said the government’s support for ethanol “has quite frankly triggered a domino effect that is hurting American consumers, energy producers, food manufacturers, and retailers,” adding that he has support for the bill from livestock interests and the petroleum industry.

But while Goodlatte’s stuck to the topic of corn-based fuel, Brooke Coleman, director of the trade group that represents non-corn biofuel producers, says the bill would apply to all kinds of biofuel, and have the consequence of barring future growth of the kind Obama envisions.

“It’s a total smokescreen,” Coleman said. “You can’t ban ethanol over ten percent and pretend you’re not affecting the advanced biofuels. You’d be banning our product.”

In November the EPA, facing pressure from drought-beset governors to waive federal rules mandating ethanol use, found that the ethanol industry did not contribute to higher food prices and ruled not to grant the requested waivers, which “greatly disappointed” Goodlatte, who introduced a similar, unsuccessful bill in 2011.

Given how much of the gasoline market corn-based ethanol eats up, Coleman said; placing a hard-and-fast limit on biofuels in the gas supply would kill off the nascent advanced biofuels industry before the president finds ways to fund it.

“[Goodlatte] is an advocate for protecting the free market for oil,” he said. “There’s no place for us to go.”