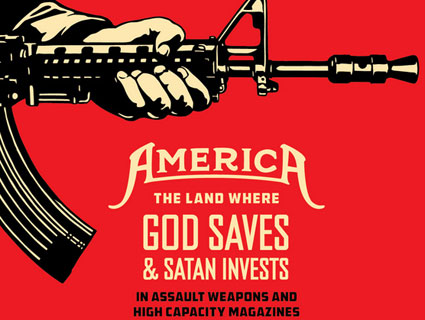 Part of a poster illustrated by Shepard Fairey, which was handed out during Thursday's anti-NRA protest.Shepard Fairey

Demonstrators protesting the US Senate’s inaction on gun violence gathered in Washington’s McPherson Park on Thursday before marching to the front doors of five lobbying firms that have worked on behalf of the National Rifle Association. The payments those firms received from the NRA in 2012 were displayed on giant novelty checks that demonstrators held up for photo-ops in front of police officers guarding the entrances.

That wasn’t the original plan, exactly. The protest’s organizers, which included Occupy the NRA, Public Campaign, and CREDO*, had intended to drive a hearse full of caskets to the firms back on April 16. That was the day before the Senate rejected the watered-down background check compromise bill brokered by Sens. Joe Manchin (D-W.Va.) and Pat Toomey (R-Pa.). It was also the day after the Boston bombing, after which the organizers decided to postpone the march and tone down the imagery.

They didn’t tone it down entirely. Aaron Black, an Occupy the NRA organizer, carried manila envelopes labeled “STOP WORKING FOR THE NRA.” They contained two photos of 16-year-old victim Brishell Jones—the first a portrait, the other a graphic image of her in a body bag after she was gunned down with an AK-47 in a drive-by shooting in 2010. Her mother, Nardyne Jefferies, personally delivered one envelope to the lobbying firm Prime Policy Group before departing for work from the protest on Thursday afternoon.

According to organizers, the protest’s schedule change reduced turnout (a point conservative media outlets eagerly jumped on) but that didn’t disappoint Black. “When we started in Zuccotti, we had the same number of people in the park,” he said. “This takes time to grow.”

Cliff Schecter, a gun safety advocate whose PR firm used to do work for Michael Bloomberg’s Mayors Against Illegal Guns, organized speeches in McPherson Park before the march began. But MAIG and other prominent gun reform groups that had pressured senators to vote for expanded background checks weren’t involved in organizing Thursday’s protest.

“After Newtown,” a grandmother said, “I told myself I would march at every opportunity I’ve got until we have a sane gun policy in this country.”

Another Occupy activist, Justin Wedes of Brooklyn, explained in a speech why Thursday’s groups were taking a different approach. “I don’t believe that you can just legislate away gun violence,” he said. “I don’t believe that the only solution to this problem lies on Capitol Hill. You cannot fully legislate away gun violence. It’s a cultural problem, and cultural problems require cultural solutions from all of us. That’s why this is an Occupy problem as well, because…we recognized you can’t get the change you want just by lobbying your politicians.”

Among the protesters was Maria Roach, a former investigative news producer who participated in activism around the Trayvon Martin case. Similar to how corporations were pressured to end their affiliations with ALEC after Martin’s death, Roach said, she hoped Thursday’s protest would kick off a campaign to pressure major companies on the same lobbying firms’ client lists, such as Google, Amazon, and Allstate.

Before the march, Roach asked demonstrators in the crowd gathered at McPherson Square to raise their hands if they’d been personally affected by gun violence. A handful did, including Chuck Reisse, who raised a sign with an image of a tombstone reading: “Because a gun manufacturer isn’t quite rich enough, 2008-2013.” Reisse later described his hometown of Philadelphia as a “nice place to live if you’re a bullet,” and said that he has friends there who have lost friends and family members to gun violence.

“Every person here is probably three [degrees of separation] away from losing somebody,” added Reisse, who has two children he said are “basically the same age as the Newtown kids.”

That concern was enough to bring out Kathleen Buffon, a resident of Chevy Chase, Maryland, who has two young grandchildren of similar ages she worries about. “After Newtown, I said to myself, ‘That’s the end,'” Buffon said. “I told myself I would march at every opportunity I’ve got until we have a sane gun policy in this country.”

*Disclosure: Mother Jones is among the dozens of nonprofits which have received funding from CREDO Mobile through its customer-selected action program.