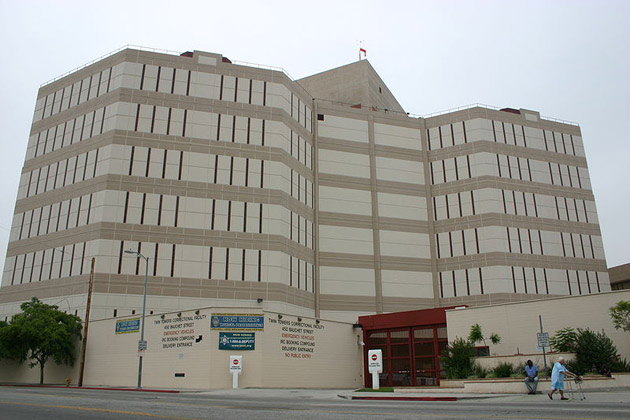 We will be rolling out the remaining contenders in the coming days, complete with photos and video. Fifth on the list is a notorious Southern California institution whose residents live in fear of attacks by a “savage gang of deputies.”

The basics: “To be an inmate in the Los Angeles County jails is to fear attacks” by a “savage gang of deputies,” explains an extensive 2011 report (PDF) from the American Civil Liberties Union, which processes about 4,500 complaints each year from inmates of the nation’s largest jail system. Packed at the best of times, Twin Towers and Men’s Central are overflowing with prisoners transferred there from overcrowded California prisons under the state’s court-ordered reorganization scheme. Eyewitnesses, including several prison chaplains, have reported that attacks by deputies at the twin facilities are often unprovoked or brought on by the slightest infractions. Additional deputies often pile on, sometimes after being alerted to the action on their walkie-talkies.

The report includes an anecdote, for instance, in which a prisoner who sustains multiple injuries in such an attack, is allegedly paraded naked down a jail module as a deputy yells “gay boy walking,” placed in a cell, and beaten and raped by other inmates as deputies stand by.

“None of this happened,” counters Los Angeles Sheriff’s Department spokesman Stephen Whitmore, who insists that the incident was thoroughly investigated. The man, Whitemore says, was assaulted by his fellows after word got out that he had been reading other prisoners’ mail and contacting their girlfriends. He also received a prompt medical examination: “There was no evidence that he was ever raped at all. There was no evidence that anything was said to him.”

Yet the ACLU’s subsequent lawsuit against the Sheriff’s Department contains a mind-blowing compendium of alleged attacks and brutality by staff that continues on for more than 30 pages: Prisoners are taunted with homophobic slurs, tormented and beaten while handcuffed, kicked, punched, Tasered, and pepper-sprayed—among other indignities.

“You fucking whiners,” one guard allegedly told a prisoner he’d just beaten badly. “Tell this to the ACLU, I dare you.”

What’s more, the suit alleges, the jail has a pattern of sweeping such episodes under the rug. “Incidents of deputy-on-inmate violence” it reads, “are routinely reported by deputies as an unprovoked inmate-on-deputy assault.” And when prisoners complain of a beating or injury at the hand of deputies, “those complaints are almost universally declared unfounded.”

In one alleged act of retaliation, two officers delivered a fierce beating to a prisoner who earlier had spoken to an ACLU representative on the block, “hitting him repeatedly in the face and knees with a flashlight” (he later received stitches on both sides of his face) before pepper-spraying him and throwing him down a flight of stairs. As the man lay bleeding, one of the deputies allegedly called out, “‘You fucking whiners, tell this to the ACLU, I dare you.'”

In another case, deputies, believing a prisoner had called them “gay,” allegedly slammed the man’s head into a concrete wall, causing a concussion and a gash that required 35 stitches. He was then punched, kicked, pepper-sprayed, and shocked with a stun gun. The ACLU has even received reports of attacks on inmates who are mentally ill or confined to wheelchairs. Thomas Parker, a former FBI agent who oversaw the investigation of the Rodney King beating, called many of the routine beatings in the LA County jails “far more severe than the King beating.”

The backlash: The number and serious nature of the allegations against the the Los Angeles County jail system has made it the subject of an ongoing FBI investigation. Last September, the pattern of abuse documented by the ACLU was confirmed in a scathing 194-page report by a blue-ribbon commission convened by the LA County Board of Supervisors. “I do have some deputies who have done some terrible things,” Sheriff Baca admitted afterward. He pledged that he would get “personally engaged” in jail oversight.

Watch: Chaplain Paulino Juarez describes a beating by the guards.

Next prison: A place where the wrong Christmas card might land you in the hole.