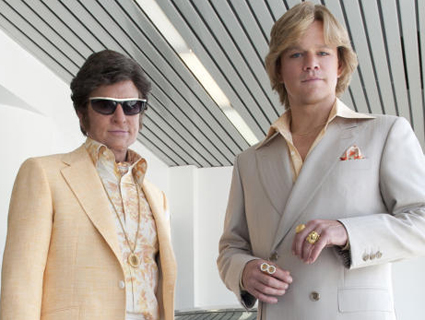 Michael Douglas, left, and Matt Damon, playing lovers in the '70s and '80s.Courtesy of HBO

Behind the Candelabra
HBO Films
118 minutes

Steven Soderbergh‘s Behind the Candelabra (which premieres Sunday, May 26 at 9 p.m. EDT on HBO) is as good as you’ve heard. It’s a moving and beautifully made film that traces the clandestine half-decade romance between Vegas showman and pianist Liberace and his much, much younger live-in boyfriend Scott Thorson, who cowrote the 1988 memoir on which the film is based. (My colleague Maggie Caldwell has a good reflection on, among other things, meeting the flashy and famous entertainment icon when she was a baby here.)

The whole cast does a superb job; as Liberace, Michael Douglas crafts a portrait of celebrity isolation and capriciousness worthy of an Oscar nomination—if only he were eligible.

The reason he is not eligible is because Behind the Candelabra, despite competing in the 2013 Cannes Film Festival, will not be released in US theaters. And the reason you will be watching this film (which could very well be Soderbergh‘s last before he retires from movies and moves on to making TV shows full time) on cable television instead of at your local multiplex is because of its conspicuous gayness.

During a press tour in January, Soderbergh explained how he was turned down by every studio he approached with his Liberace project because executives deemed it “too gay” to turn an acceptable profit:

Nobody would make it. We went to everybody in town. We needed $5 million. Nobody would do it…They said it was too gay. Everybody. This was after Brokeback Mountain, by the way. Which is not as funny as this movie. I was stunned. It made no sense to any of us…[The people at HBO are] great and they’re really good at what they do, and ultimately I think more people will see it, and that’s all you care about. Studios were going, “We don’t know how to sell it.” They were scared.

This is the same Hollywood that still hasn’t come to terms with showing a black man and a white woman having passionate sex on-screen.

The film does indeed have its share of gay love and intercourse, including a sweaty, grunting sequence in which Scott (played by Matt Damon) is taking Liberace from behind while the aging performer offers him drugs to take during sex. But the Hollywood rejection shouldn’t have been all that shocking to Soderbergh and company. Hollywood and mainstream cinema have a long and well-documented history of not “knowing” how to “sell” and market movies featuring explicit gay sex to a wide audience.

Films starring big names that also deal with gay sexual content—such as the sweet 2009 comedy I Love You Phillip Morris starring Jim Carrey and Ewan McGregor as prison lovers—typically do not fare too well at the box office. (It’s worth noting that Brokeback Mountain, the 2005 Oscar-winner that Soderbergh referenced on his press tour, included a marketing and publicity strategy that went out of its way not to mention even the word “gay.”)

Again, nobody should be too surprised. This is the same Hollywood and big-money film industry that still hasn’t come to terms with showing a black man and a white woman having passionate sex or dating on-screen.

But if you personally are cool with watching a very good movie that is also supposedly “too gay,” then Behind the Candelabra is definitely one to check out. Here’s its trailer: