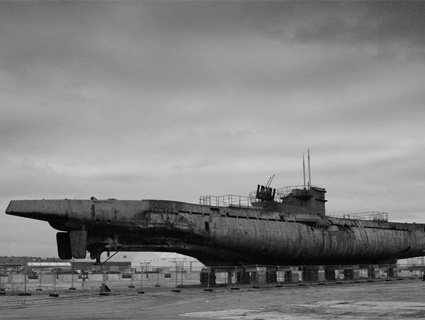 The National Oceanic and Atmospheric Administration has some fresh news from World War II: 13 Merchant Marine ships sunk by the German navy in the Battle of the Atlantic threaten to release oil from their watery graves.

The finding comes in an assessment presented to the Coast Guard that analyzed 20,000 shipwrecks in US waters, and identified 36 as posing a significant threat of oil pollution. Seventeen of those are recommended for further assessment, which could lead to missions to remove their fuel oil and oil cargo. Besides the Merchant Marine vessels, the worrisome ships include a barge lost in bad weather in 1936, two ships sunk in separate collisions in 1947 and 1952, and a tanker that exploded in 1984. 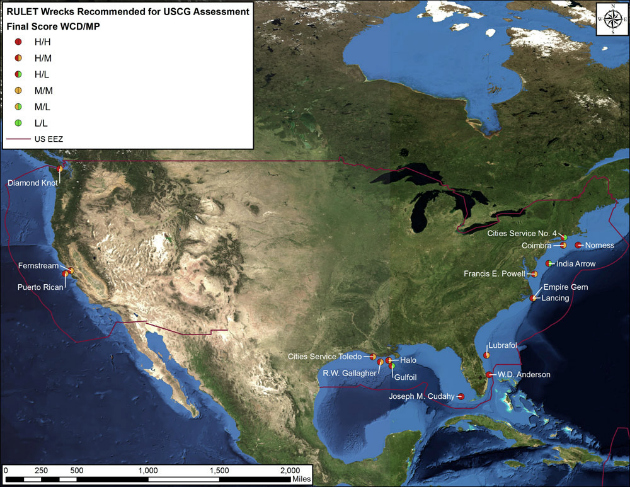 “This report is the most comprehensive assessment to date of the potential oil pollution threats from shipwrecks in US waters,” says Lisa Symons, resource protection coordinator for NOAA’s Office of National Marine Sanctuaries. “Now that we have analyzed this data, the Coast Guard will be able to evaluate NOAA’s recommendations and determine the most appropriate response to potential threats.”

An initial screening of the 20,000 shipwrecks found 573 that could pose substantial pollution risks based on the vessel’s age, type, and size. Ships built of steel, made to be a tanker or to carry over 1,000 gross tons got on the list. Further investigation narrowed the number to 107 wrecks. Some were deemed navigational hazards and demolished, and others were salvaged. But most of the 107 have not yet been directly surveyed for pollution potential. In some cases little is known about their current condition. 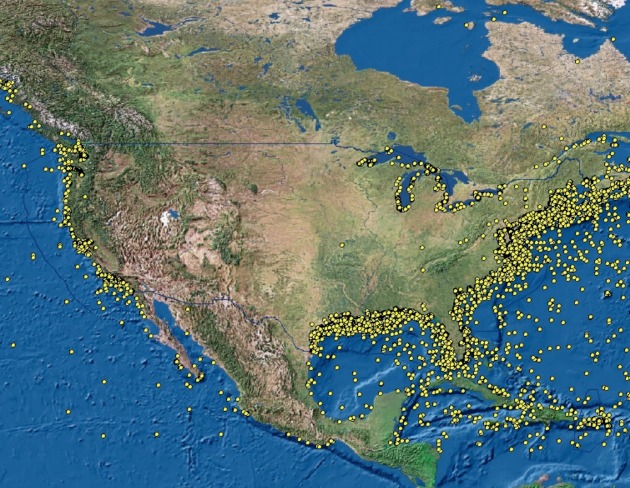 Locations of some of the 20,000 shipwrecks. NOAA

The report is part of NOAA’s Remediation of Underwater Legacy Environmental Threats (RULET) project, which hunts down potential sources of oil pollution from sunken vessels. Knowing where these ships lie helps oil response planning efforts, and may assist in tracking down mystery spills—sightings of oil where a source is not immediately known or suspected. 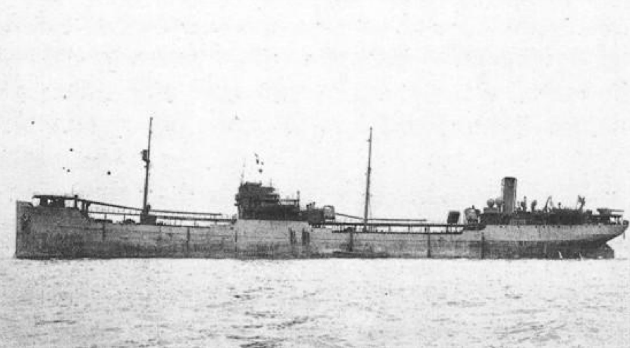 The Gulfstate before it was torpedoed in 1943. NOAA/SSHSA Collection, University of Baltimore Library

The vessel ranked worst on the NOAA’s risk assessment scale is the WWII tanker the Gulfstate, torpedoed and sunk off the Florida Keys in 1943. Here’s a casualty narrative for the ship, as excerpted by NOAA, that tells the terrifying tale of how the vessel went down after an attack by a Kriegsmarine U-Boat:

At 09.03 hours on 3 Apr, 1943, the unescorted Gulfstate (Master James Frank Harrell, lost) was hit by two torpedoes from U-155 about 50 miles southeast of Marathon Key, Florida while steaming a nonevasive course at 10.5 knots. The first torpedo struck on the port side directly under the bridge and ripped a large hole in the hull at the waterline, causing immediate flooding and setting the cargo on fire. The second torpedo struck at the engine room. The fire leapt 100 feet in the air and spread from the bridge to the after part of the vessel. The master ordered the engines secured and the ship abandoned, but the vessel sank bow first within four minutes. None of the lifeboats could be launched and all rafts were lost in the fire. Only a single doughnut raft managed to break free of the tanker. The eight officers, 34 crewmen and 19 armed guards (the ship was armed with one 5in, four .50cal and two .30cal guns) had to jump in the water and swim through 600 feet of burning oil surrounding the tanker. The survivors clung to floats and the single raft for seven hours before being discovered by a U.S. Navy blimp, which dropped two rubber life rafts. An U.S. Coast Guard seaplane picked up three of the most seriously wounded two hours later and took them to Miami. One hour later the remaining 15 survivors (five of them wounded) were picked up by the American patrol craft USS YP-351. Three of the wounded were later transferred to USS Noa (DD 343) for medical treatment. All survivors were landed at Key West. Eight officers, 26 crewmen and nine armed guards were lost.

Gulfstate ranks as the No. 1 priority for the Coast Guard to assess and potentially to attempt to salvage or remove its oil, according to the NOAA rating system. That’s in part because it might still be holding almost 84,000 barrels (about 3.5 million gallons) of oil, and in part because of its location near Florida’s coral reefs. Unfortunately no one knows exactly where the Gulfstatewent down, though it’s thought to lie in more than 2,800 feet of water. So NOAA is recommending steps to find the vessel, including asking Florida’s commercial and recreational fishermen to report oil spottings that could lead back to the ship.

Many of the 20,000 wrecks in US waters date to before 1891, when US shipping began switching to fuel oil. Most of these earlier wrecks from the age of coal and sail pose little or no environmental threat. You can find the full list of potentially polluting wrecks here.