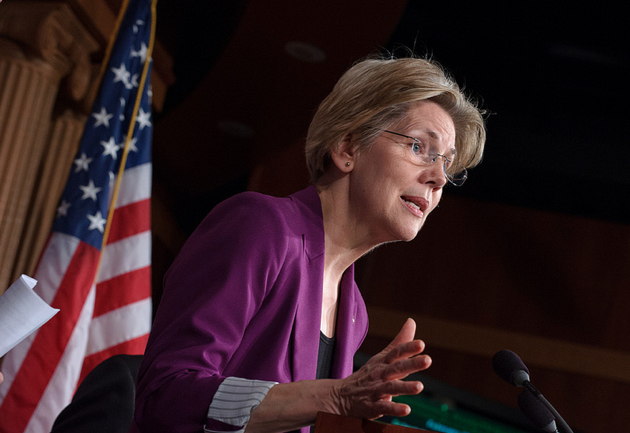 It’s been 50 years since President John Fitzgerald Kennedy signed the Equal Pay Act, a law that called for equal pay for equal work. Today, women today still earn 77 cents for every dollar a man earns. On Monday, in an op-ed in Massachusetts’ Springfield Republican, Sen. Elizabeth Warren (D-Mass.) called on Congress to end this once and for all by passing the Paycheck Fairness Act, a bill Warren and Sen. Barbara Mikulski (D-Md.) introduced in January.

Warren and Mikulski’s Paycheck Fairness Act would amend the Equal Pay Act of 1963 to require employers that are sued for discrimination to demonstrate that wage differences between men and women doing the same work are the result of things like education, training, or experience, not gender. Right now, a woman who sues her employer has to prove she was discriminated against. If Warren’s bill passes, employers would have to prove they didn’t discriminate. The bill also strengthens penalties for pay discrimination, putting them on par with punishments imposed on employers who discriminate based on race or ethnicity; and increases protections against retaliation for workers who inquire about their employer’s wage practices.

In the op-ed, the senator points out that the pay gulf between men and women adds up to “hundreds of thousands of dollars” over a lifetime, a gap our economy can’t afford, especially as more women than ever are the primary breadwinners: “For middle class families, it takes two incomes to get by these days, and many families depend as much, if not more, on Mom’s salary as they do on Dad’s. And for single-parent households, lower salaries make it that much harder to stay afloat.”

Paycheck inequality also makes America’s student debt problem worse. Women and men borrow about the same amount to fund their educations, but a year after graduating, women only make 82 cents for every dollar men do. “This means that as a percentage of income, many young women bear a greater student loan debt burden than young men,” Warren says.

Congress and the Obama administration have made steps toward greater pay equality in the past few years. The first bill that President Obama signed was the Lilly Ledbetter Fair Pay Act, which upholds the rights of victims of pay discrimination to seek legal recourse. Earlier this spring, the Senate passed a budget amendment supporting efforts to close the wage gap. On Monday, President Barack Obama also called for passage of the Paycheck Fairness Act, which was introduced in both chambers in the last Congress but never made it out of committee.

“There’s still more work to be done,” Warren says. “I want every little girl to grow up thinking about becoming a doctor or a scientist, a union leader or a small business owner. I don’t want her to have to think about how she will get by on wages that are lower.”