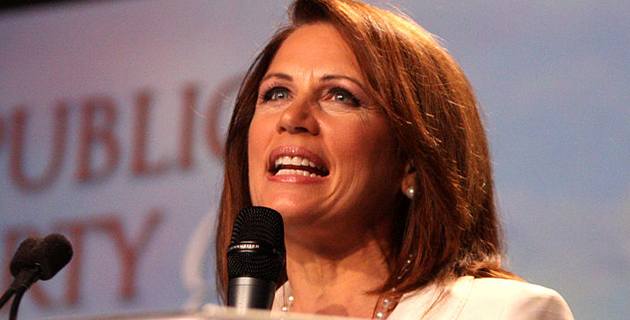 Rep. Michele Bachmann (R-Minn.)—the tea party lawmaker who served as one of the main inspirations for season five of True Blood—recently attacked the Obama administration’s push for immigration reform in the most Michele Bachmann way possible. Here she is talking about immigration reform, and how conservatives in Congress can stop the president from granting undocumented immigrants the right to vote in American elections:

[Obama] has a perpetual magic wand, and nobody’s given him a spanking yet and taken it out of his hand. That’s what Congress needs to do. Give the president a major wake-up call. And the way we spank the president is we do it through the checkbook.

Bachmann, the one-time front-runner for the 2012 Republican presidential nomination who sits on the House Intelligence Committee, had more to say about Obama’s “magic wand,” claiming that in 2012 he unilaterally gave undocumented “Latina” immigrants the right to vote, and that he will likely do the same in 2014, thus dooming the GOP forever. (That’s not true. Click here for a breakdown of why.) Bachmann made the magic wand comments in a recent interview with WorldNetDaily, a premiere birther and conspiracy-mongering website.