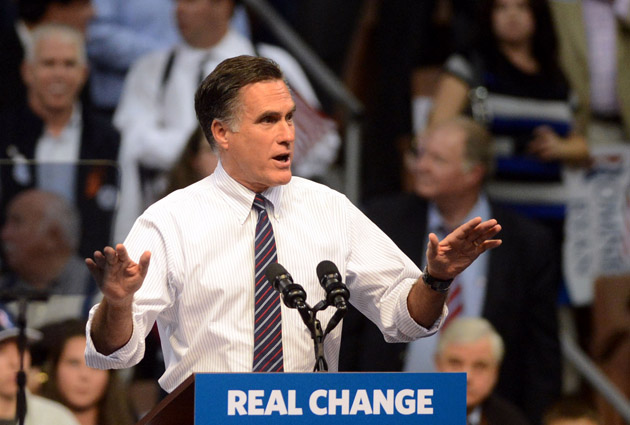 Poor Mitt Romney. He seems unable to come to terms with one of the most significant episodes in his public life: the 47 percent video that undercut his chance of becoming president of the United States.

Sunday’s Washington Post featured an article adapted from reporter Dan Balz’s new 2012 campaign book, Collision 2012, and the excerpt focused on Romney’s take on why he entered the race and why he lost. Toward the end of the article, which was based on a series of interviews Balz conducted with Romney, the twice-failed Republican presidential candidate was forced to confront his 47-percent remarks, and he just couldn’t do so forthrightly.

First, Romney blamed his initial botched response to the video—his bungled, impromptu press conference the night Mother Jones released the video—on a misperception of what was on the video:

[Romney] was in California and said at first he couldn’t get a look at the video. His advisers were pushing him to respond as quickly as he could. “As I understood it, and as they described it to me, not having heard it, it was saying, ‘Look, the Democrats have 47 percent, we’ve got 45 percent, my job is to get the people in the middle, and I’ve got to get the people in the middle,'” he said. “And I thought, ‘Well, that’s a reasonable thing.’… It’s not a topic I talk about in public, but there’s nothing wrong with it. They’ve got a bloc of voters, we’ve got a bloc of voters, I’ve got to get the ones in the middle. And I thought that that would be how it would be perceived—as a candidate talking about the process of focusing on the people in the middle who can either vote Republican or Democrat. As it turned out, down the road, it became perceived as being something very different.”

Whoa. He first thought the video only showed him stating the obvious? That Obama had his voters, Romney had his supporters, and the small percentage in between was up for grabs? Well, that would have hardly caused a fuss. But here’s what doesn’t track: When the video was posted, an article accompanied the video with a transcript of what Romney had said. Anyone with a smart phone could access the video and the transcript of his remarks, in which he stated:

There are 47 percent of the people who will vote for the president no matter what. All right, there are 47 percent who are with him, who are dependent upon government, who believe that they are victims, who believe the government has a responsibility to care for them, who believe that they are entitled to health care, to food, to housing, to you-name-it. That that’s an entitlement. And the government should give it to them. And they will vote for this president no matter what… These are people who pay no income tax…”[M]y job is is not to worry about those people. I’ll never convince them they should take personal responsibility and care for their lives.”

Had Romney read these words, he would have known this comment went far beyond a recitation of the basic political dynamics. It was an expression of scorn for those voters supporting Obama, with Romney clearly dismissing them as lazy freeloaders who refused to “take personal responsibility.” So did Romney rush to the podium that day without bothering to see what all the bother was about? That’s tough to believe. But if that’s what transpired, it says much about the weaknesses of the Romney campaign and the candidate.

Part Two of Romney’s explanation to Balz was that the remark was taken out off context:

The president said he’s writing off 47 percent of Americans and so forth. And that wasn’t at all what was intended. That wasn’t what was meant by it. That is the way it was perceived.

How else could his remark have been perceived? He clearly slammed 47 percent of Americans for not taking care of themselves—and added that there wasn’t much he could do about that.

Balz tried to point this out: “But when you said there are 47 percent who won’t take personal responsibility—” Romney interrupted: “Actually, I didn’t say that…That’s how it began to be perceived, and so I had to ultimately respond to the perception, because perception is reality.”

This is deep denial that goes beyond the usual spin. And Romney gallantly tried to prove his point to Balz. He referred to notes on his iPad and cited the question at the Florida fundraiser that led to his supposedly misperceived statement:

Audience member: “For the last three years, all of us have been told this, ‘Don’t worry, we’ll take care of you.’ How are you going to do it in two months before the elections, to convince everyone you’ve got to take care of yourself?” And I’m saying that isn’t my job. In two months, my job is to get the people in the middle. But this was perceived as, “Oh, he’s saying 47 percent of the people he doesn’t care about or he’s insensitive to or they don’t care—they don’t take responsibility for their life.” No, no. I’m saying 47 percent of the people don’t pay taxes and therefore they don’t warm to our tax message. But the people who are voting for the president, my job isn’t to try and get them. My job is to get the people in the middle. And I go on and say that. Take a look. Look at the full quote. But I realized, look, perception is reality. The perception is I’m saying I don’t care about 47 percent of the people or something of that nature, and that’s simply wrong.

Oh boy, the full quote doesn’t help, particularly this line: “I’ll never convince them they should take personal responsibility and care for their lives.”

Quoting the question doesn’t bolster his case, either. Romney had been responding to a rich funder who was griping that too many damn Americans don’t take care of themselves. Romney answered by essentially agreeing with the premise of the question. Ever the spreadsheet guy, he put a number on it: 47 percent. And he threw up his hands and said he could neither win over these Americans as voters or persuade them to be responsible adults. They were lost on both counts.

Romney knows he screwed the pooch with his 47 percent rant. He told Balz, “Well, clearly that was a very damaging quote and hurt my campaign effort.” But the fellow who wanted to lead the United States cannot look at reality squarely and own what he said. Months after being rejected by American voters—winning the support of, uh, only 47 percent—Romney still cannot take responsibility himself.