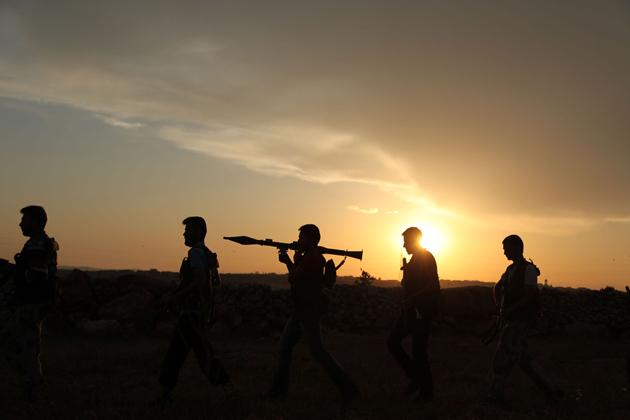 This week the exiled head of the Syrian opposition movement said he would meet representatives of President Bashar al-Assad in Geneva, a promising turn for a conflict that has left 100,000 dead, including many civilians, since spring 2011. It has been a long, bitter battle, but for many Syrians one root of the violence stretches back to several years before al-Assad’s troops began picking off anti-government protestors. Beginning in 2006, a prolonged, severe drought decimated farmland, spiked food prices, and forced millions of Syrians into poverty—helping to spark the unrest that eventually exploded into civil war.

The Syrian conflict is just one recent example of the connection between climate and conflict, a field that is increasingly piquing the interest of criminologists, economists, historians, and political scientists. Studies have begun to crop up in leading journals examining this connection in everything from the collapse of the Mayan civilization to modern police training in the Netherlands. A survey published today in Science takes a first-ever 30,000-foot view of this research, looking for trends that tie these examples together through fresh analysis of raw data from 60 quantitative studies. It offers evidence that unusually high temperatures could lead to tens of thousands more cases of “interpersonal” violence—murder, rape, assault, etc.—and more than a 50 percent increase in “intergroup” violence, i.e. war, in some places.

“This is what keeps me awake at night,” lead author Solomon Hsiang, an environmental policy post-doc at Princeton, said. “The linkage between human conflict and climate changes was really pervasive.”

Any cop could tell you that hot days can make people snap—last summer veteran police boss William Bratton argued that a warm winter contributed to a rash of murders in Chicago. But Hsiang and his colleagues wanted to see how this pattern held up across the globe, at different times and with different kinds of conflict, to gauge just how much the climate can lead to violence.

So they rounded up recent studies that could reliably show a causal connection between climate and violence in a variety of contemporary, historical, and experimental settings. They re-crunched the raw data from these studies to smooth out details specific to each case (temperature data was converted to deviation from average, rather than absolute temperatures, for example) in order to make apples-to-apples comparisons across time and across the world. What emerged was an unsettling new picture of the exact effect climate changes have on our tendency toward violence: For every one standard deviation toward warmer temperatures, the median frequency of “interpersonal” violence rose 4 percent. In the US, that would translate to an additional 56,000 violent crimes every year on top of the average 1.4 million (according to FBI data) we’ve experienced annually in the last decade. And that could just be the beginning: Hsiang’s study points out that inhabited places on Earth are likely to see warming of two to four standard deviations by 2050.

Meanwhile, the study found the median frequency of “intergroup” violence jumped 14 percent for every standard deviation; again, in the context of projected future warming, this means that by 2050 the threat of war could climb more than 50 percent in some places.

The study also found general agreement amongst case studies that exceptionally high and low rainfall—particularly when it impacts agricultural production—can lead both to interpersonal and intergroup violence. But even looking only at scientists’ projections for future temperature increases, the statistical rise in violent tendencies is significant enough, the study claims, that “amplified rates of human conflict could represent a large and critical impact of anthropogenic climate change.” In other words, it’s something we might need to prepare for—just like rising seas or nastier wildfires.

It’s not just isolated hot days that spur increased violence; the study found increased conflict in warmer-than-usual periods over time spans ranging from an hour (in a controlled experiment where police trainees were stuck in rooms of different temperatures and asked to respond to a hypothetical aggressor; cops in the hot room were much more likely to fire their weapons) to thousands of years (in an anthropological study of how summer temperatures drove the collapse of ancient human settlements in northern Norway).

With this connection nailed down, Hsiang said, the next step is to better understand what exactly about higher temperatures leads to conflict; he compared the pursuit to that of early twentieth-century medical researchers who knew smoking caused cancer but didn’t understand why at a molecular level. In the case of Syria, it’s easy enough to draw a line from heat and drought to civil unrest, but that doesn’t help explain why a protest is more likely to boil into a riot on a hot day, or why more murders are likely to happen in a hot decade.

“We have a mountain of evidence,” he said. “But we can’t completely explain all the intervening steps.”