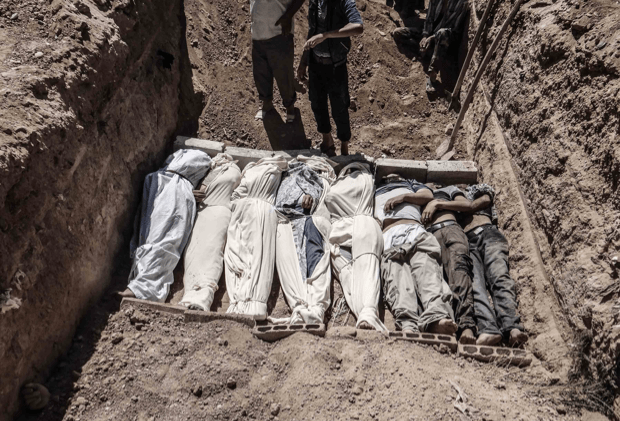 Bodies are buried in Ghouta, Syria, after a chemical weapon attack killed as many as 1,300. Erbin News/NurPhoto/ZUMA

UPDATE August 30, 2013, 1:00 PM EST: The Obama Administration has released its assessment of the chemical weapons attack in Syria. According to the document (view it here), the US government “assesses with high confidence” that the Syrian government carried out the attack, using a nerve agent. The document also says that the Syrian regime maintains a stockpile of numerous chemical agents, including mustard, sarin, and VX.

Here is the map released by the White House showing areas reportedly affected by the August 21 chemical attack (click to enlarge.) 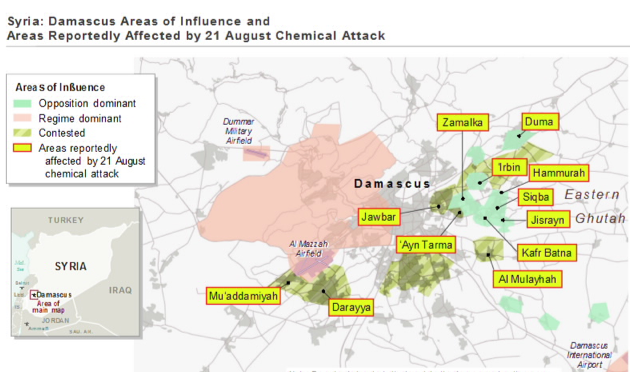 The Obama administration has moved a fifth destroyer containing cruise missiles into the Mediterranean Sea and seems prepared to take limited punitive military action against Syria for the presumed use of chemical weapons by Bashar al-Assad’s regime. The White House is expected to declassify evidence today that will show that Assad’s forces launched a poisonous gas attack against civilians earlier this month, killing more than 1,300. A year ago, President Obama set a “red line,” noting that the use of chemical weapons would be unacceptable in the Syrian civil war that has raged for over two years and killed over 100,000 people. But with Britain refusing to lend support for a retaliatory strike, some members of Congress are wondering whether the use of chemical weapons is an automatic rationale for America to go to war. Here’s a backgrounder on these nasty weapons, who has them, what they do to the body, and how the United States has in the past responded to their use.

What is a chemical weapon? Experts generally categorize chemical weapons based on their biological effects. According to the Organization for the Prohibition of Chemical Weapons, chemical weapons include nerve agents, choking agents, blister agents such as mustard gas, blood agents, chemicals that cause psychotic disorders, and riot-control agents, such as tear gas. Also included are defoliants such as Agent Orange, which was used by the United States in Vietnam.

Under the 1997 Chemical Weapons Convention (more on that below), it’s perfectly fine for countries to deploy tear gas against domestic protesters so long as it’s not used as a weapon of war. But as Slate points out, riot-control agents can still be deadly in enclosed spaces. According to Physicians for Human Rights, the main chemical weapons doctors watch out for these days are VX, sarin, and tabun—all nerve agents—and BZ and mustard gas.

What do these chemicals do to people? Chemical weapons wreak havoc on the body, but are not always lethal. Nerve and choking agents hit hardest. When you inhale a choking agent—such as chlorine gas, which was used extensively during World War I—it forces fluid into your lungs, and that basically drowns you. Nerve agents can kill within minutes (in the case of VX), and cause twitching and seizures prior to death. Symptoms of mustard gas include skin blistering, burning eyes, abdominal pain, nausea, vomiting, and swelling of the respiratory tract that can seal the victim’s airway. They take 2 to 24 hours to appear and are not usually lethal if adequate health care is available.

Which chemical agent was used in Syria? Sarin, allegedly. When absorbed through the skin, sarin attacks the nervous system and can kill a person in 5 to 10 minutes. It was developed in 1938 in Nazi Germany and was allegedly tested on people in concentration camps. Sarin was the gas used a deadly 1995 attack on the Tokyo subway by an extremist cult. (See timeline below.)

How are survivors of the Syrian attack being treated? Tim Shenk, a spokesman for Doctors Without Borders, which operates six hospitals and four health centers in the north of Syria, says that the main drug used to treat neurotoxic symptoms is atropine. The group sent approximately 1,600 vials of the drug to field hospitals in Damascus about six months ago. Those were used in the recent incident, and Doctors Without Borders is now sending 15,000 additional vials to facilities in that area. If atropine is injected within one hour of exposure, it can be highly effective—but in Syria, there wasn’t enough atropine to treat everyone, and not all patients made it to the hospital in time.

Why are chemical weapons considered worse than, say, bombing women and children? “Unfortunately, there are no international laws against war itself,” Daryl Kimball, executive director of the Arms Control Association, tells Mother Jones. “But there are rules about how wars can and cannot be conducted…Holding the line against further chemical weapons use is in the interests of the United States and international security, because chemical weapons produce horrible, indiscriminate effects, especially against civilians, and because the erosion of the taboo against chemical weapons can lead to further, more significant use of these or other mass destruction weapons in the future.” Chemical weapons also evoke the horrors of World War I and the Holocaust.

But writer Paul Waldman sees international hypocrisy on the subject. “Getting killed by mustard gas is surely awful,” he writes in The American Prospect. “But so is getting blown up by a bomb. Using one against your enemies gets you branded a war criminal, but using the other doesn’t.” Steve Johnson, a visiting fellow at the United Kingdom’s Cranfield University and an expert on chemical warfare, said in an interview, “I can understand why [chemical warfare] feels emotive to us—it is insidious, there is no shelter, it is particularly effective on the young, elderly, and frail, and can be a violent and excruciating death.” He adds, “When one breaks it down ethically, though, it seems impossible to say that it is more acceptable to kill 100 people with explosives than with nerve agent.”

Does the United States usually intervene when chemical weapons are used? Far from it. “As far as I know,” the Arms Control Association’s Kimball says, “this would be among the first instances when a state’s use of chemical weapons would have prompted military action by the US or by others.” And Foreign Policy reported this week that unearthed CIA documents show that the United States gave the location of Iranian troops to Iraq in 1988, fully aware that Saddam Hussein’s regime was planning to attack Iran with chemical weapons—including sarin.

Here are some of the most notable recent uses of chemical weapons by governments and terrorist groups. 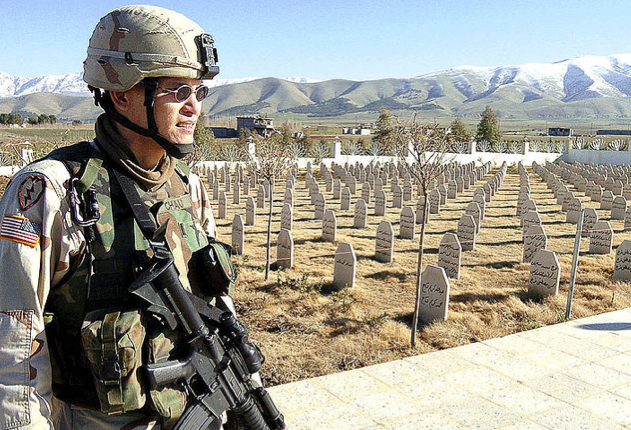 1980s, Iran: During the Iran-Iraq War, Saddam Hussein’s regime uses nerve gas, including sarin, and mustard gas in Iran, killing up to 20,000 soldiers. The United States was complicit, according to recently released CIA documents.

1988, Halabja, Iraq: Saddam Hussein’s regime unleashed mustard gas on a town overtaken by Kurdish rebels at the end of the Iran-Iraq War, killing about 5,000 civilians.

Are chemical weapons allowed under international law? Nope. In 1925, following the large-scale use of nerve gas, tear gas, and other deadly agents during World War I, countries signed a Geneva protocol prohibiting the use of gas as a method of warfare on the grounds that it has been “justly condemned by the general opinion of the civilized world.” Using chemical weapons is a war crime under the Statute of the International Criminal Court (ICC). A legally binding arms control treaty on chemical weapons, the Chemical Weapons Convention, was drafted in 1992. Its signatories agreed to not use or produce chemical weapons, and to destroy their remaining stockpiles. Since 1997, when the treaty went into effect, the Organization for the Prohibition of Chemical Weapons has inspected more than 2,600 chemical weapons sites declared under the treaty. Here’s a map showing which countries have not yet signed and/or ratified the treaty, or ratified it only in the last five years:

Which nations support US military intervention on the basis of a chemical weapons attack? British Prime Minister David Cameron pledged his support for a US strike against Syria, but he was rebuffed by parliament, including members of his own Conservative Party. The UN Security Council meeting on the topic ended in a stalemate, without authorization for military intervention. Russia passionately opposes intervention, as it blames Syrian rebels for the chemical attacks. France could turn out to be the crucial backer for Obama, as President Francois Hollande has expressed his support, and is not bound by his parliament’s vote.