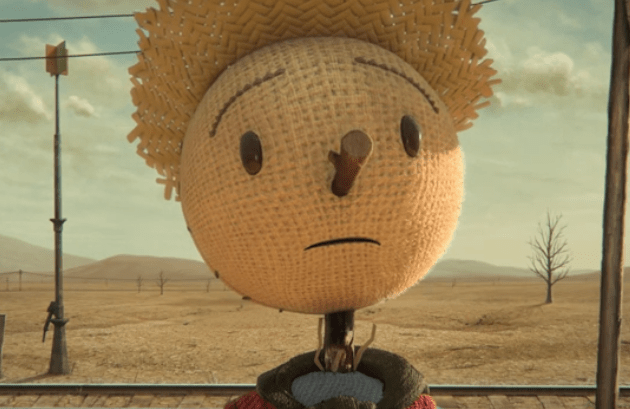 Chipotle Mexican Grill, the popular burrito chain that has more than 1,500 restaurants worldwide, hit the advertising jackpot earlier this month when it released a Pixar-style commercial that went viral and turned the restaurant into an overnight poster child for sustainable food. The advertisement, set to a mournful Fiona Apple song, depicts an animated scarecrow discovering the truth about factory farms—and then deciding to start his own farm instead (the scarecrow’s farm is apparently vegetarian, because the animals magically disappear).

The restaurant chain has pushed hard to separate its image from McDonald’s, a former investor in the company, and revamp itself as a sustainable-food choice for Americans who are against global warming and antibiotics, and in favor of fresh, locally sourced food. In its advertisements, the company throws around the word “natural” a lot—but unlike “organic,” that doesn’t have an actual USDA definition. So how well does Chipotle actually stack up? In an email, Chris Arnold, a spokesman for Chipotle, tells Mother Jones that “Chipotle is probably more transparent about the ingredients we use than any other national restaurant company. We have never professed to being perfect. Rather, the commitment we have made is to constant improvement, and we are always working to find better, more sustainable sources for all of the ingredients we use.”

One of the main characters in Chipotle’s scarecrow video is a creepy bird that flies around the factory farm and appears to be some kind of hybrid between a crow and a robot. In another scene, bird-robots are pumping mysterious chemicals into a chicken, inflating it like a beach ball. The video clearly implies that messing with Mother Nature is bad news—and Chipotle doesn’t do it. Arnold says that “the film is about a host of issues in agriculture and industrial food production—the overuse of antibiotics, harsh crowding of animals, and the high degree to which so much food is processed. But there are no GMO references, either literal or symbolic.”

According to its website, most of Chipotle’s products contain genetically modified organisms (GMO), which accelerate the pesticides arms race and have not been adequately tested for long-term health effects. Chipotle has taken the laudable step of publicly backing GMO labeling and aiming to “eliminate GMOs from Chipotle’s ingredients”—but the restaurant isn’t there yet. According to Chipotle’s website, all soy bean oil and corn products contain GMOs. That doesn’t sound so bad, except that Chipotle chicken, steak, fajita vegetables, rice, tortilla chips, and tortillas all contain one or both of these items. (Restaurants in the New York City metropolitan area are an exception; they don’t use soy bean oil.) Additionally, Arnold tells Mother Jones that the feed given to cows and pigs “very well could be GMO, given the prevalence of GMO crops in this country. Non-GMO feed is not part of our protocol.”

The scarecrow ad wasn’t the first time Chipotle has pushed the message that its animals frolic in fields (to pop music.) In 2011, it released the animated commercial above, set to a Coldplay song. Arnold, the Chipotle spokesman, says, “I think the way we portray our suppliers is very consistent with how they operate in reality” and that Chipotle uses “a number of naturally raised meat suppliers.” Pork suppliers that fall under “naturally raised meat” are Niman Ranch Pork Company and Du Breton (you can see a Chipotle video with the founder of Niman Ranch here). Niman Ranch’s website says the farm takes many admirable steps to ensure its pigs are ethically raised, such as giving them a 100 percent vegetarian diet, veterinarian care, and allowing sows to have 64 square feet to share with their young. But the image in the commercial, that all the pigs are hanging out in a pasture, might not be accurate. Pigs at Niman Ranch aren’t required to have outdoor access. They can be housed in hoop buildings with sunlight, instead. “Growing and finishing hogs”—the kind that you eat—are only required to have 8 to 18 square feet of space each, depending on weight, if they are housed in a structure that permits outdoor access. In cases where pigs are housed in hoop buildings, they only get 5 to 14 square feet. Access to to pasture or fields is “recommended” but not required. Drew Calvert, Niman Ranch’s director of communications, tells Mother Jones that “we cannot speak to Chipotle’s advertising, claims or videos” and “the number of farmers who raise hogs for Niman Ranch fluctuates, but a majority of the farmers raise animals outdoors.”

The New Yorker also reports that some of Chipotle’s beef is bought from Meyer Natural Foods, which finishes feeding cows in feedlots—so the beef isn’t 100 percent grass-fed. (Arnold said over the phone that most of Chipotle’s beef is “raised on pasture” but not 100-percent grass fed.) Meyer’s website doesn’t list a requirement for square feet of space for cattle, instead it says its farms must meet the more subjective, “adequate space for comfort” standard. (Meyer did not immediately respond to request for comment.) Arnold also noted that “chickens are raised in chicken houses, but with more space per bird than conventionally raised chicken [in factory farms.]”

3. Are most Chipotle ingredients locally sourced? 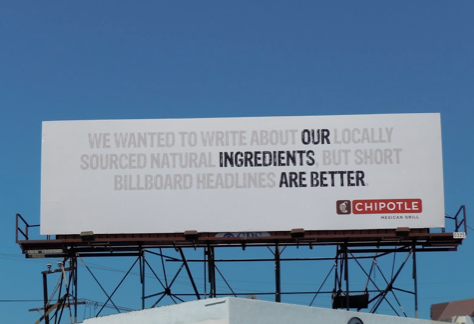 This clever billboard implies that if Chipotle were to talk about all of its “locally sourced” ingredients, it wouldn’t fit on a snappy advertisement (again, “natural” has no federally regulated definition and can mean virtually anything). Chipotle’s definition for “locally sourced” means that an ingredient was grown no more than 350 miles from a restaurant—which is 50 miles closer than the USDA recommendation—a worthy goal. But right now, the only locally sourced ingredients at Chipotle are onions, avocados, peppers, tomatoes, jalapenos, and cilantro—all of which are mixed with nonlocal items to produce the items you see on the menu. And all of which could probably fit on a billboard, with plenty of room. Arnold says using “local” in its advertisements is not misleading, because “when we advertise programs like this (whether our local produce program or our naturally raised meat program), we do it only when those things are available. Unfortunately, we can’t get local produce year-round.” He does note that Chipotle will have used more than 15 million pounds of local produce this year.

4. Does Chipotle ever use animals that are given antibiotics ? 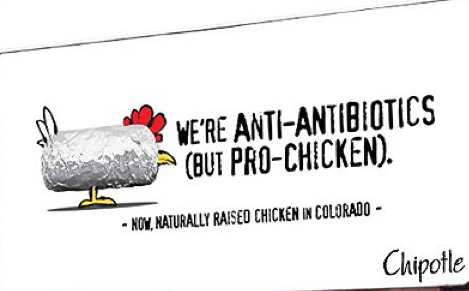 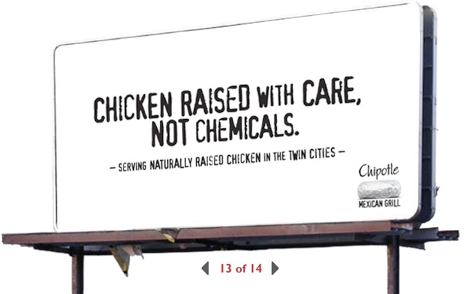 Factory farms use antibiotics on animals to promote growth, even in the face of terrible health conditions. The resulting “superbugs” can even have harmful effects on humans—for example, women have started getting urinary tract infections that are resistant to antibiotics, a problem that is being attributed to chicken factory farming. Steve Ells, Chipotle founder, chairman and co-CEO, said in an August statement, “We decided to start serving meat from animals that have never been given antibiotics or added hormones more than a decade ago…And we continue to be committed to the elimination of antibiotics that are used to promote growth in livestock being raised in confinement operations.” Right now, Chipotle allows animals that are sick to be given antibiotics, but they are not permitted to return to Chipotle’s supply and are instead sold as conventional meat. Ells said the company is “willing to consider” allowing animals to rejoin after they’ve been treated with antibiotics. Only about 80 percent of Chipotle beef is raised without antibiotics (or growth hormones) because of supply shortages—the rest is sourced from conventional farms, although Chipotle tries to notify customers when that is the case.

5. Is most Chipotle food organic? 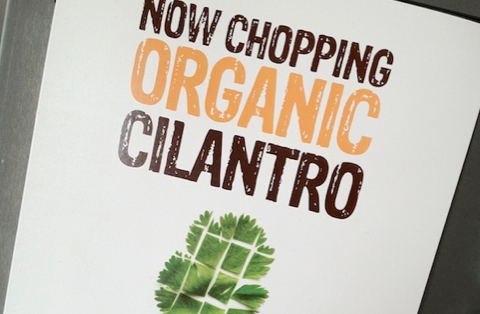 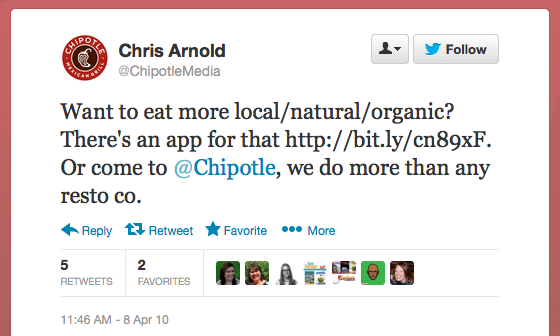 Chipotle regularly brags about its organic cilantro, its cotton products, and how it’s doing more than the rest of the industry to promote organic food. And that may be true—but organic pickings at Chipotle are still slim. (Chipotle’s Arnold says, “Twitter is somewhat limited for communications like that because of the 140-character limit, but I don’t think they ever imply that our food is ‘organic.'”) According to the Chipotle website, the only organic items—unlike the word “natural,” organic has a strict USDA definition—are beans, oregano, avocado, and cilantro, and potentially jalapenos and rice. And judging by Chipotle’s Twitter account, Chipotle isn’t revealing on its website that ingredients, like beans, labeled “organic” are not entirely organic. (Arnold argues, “We are quite careful in labeling these things so our customers know what we have and where.”) 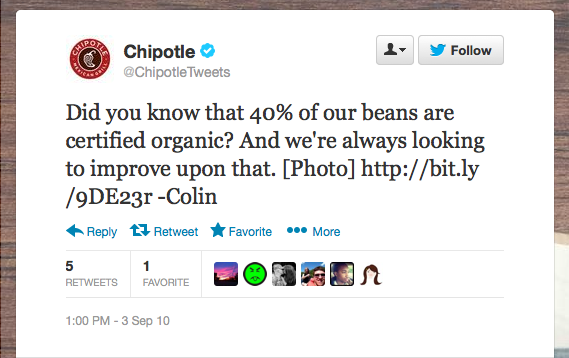 So if you’re headed off to lunch after reading this article, and you want to eat organic, avoid GMOs, and get food that’s locally sourced—your best best is to go to a grocery store, read the labels very carefully, and make a sandwich. But if that’s not an option, you’re far better off going to Chipotle than McDonald’s, where if you order a burger—literally just a bun, meat, and Big Mac sauce—you’re eating more than 60 ingredients. Good luck, America.