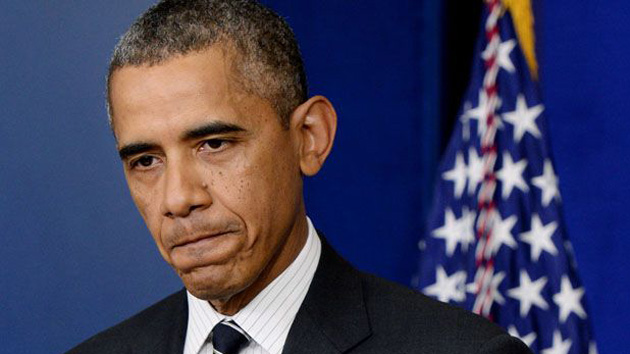 UPDATE: On Monday evening, the House Republicans refused to accept a bill funding the government that did not block Obamacare and, once again, passed spending legislation that would undermine the health care program. Consequently, a partial shut down began at midnight. Hours earlier, on Monday afternoon, Obama had criticized Republican extortion tactics. As of Tuesday morning, the president had not responded to the shutdown.

This is damn crazy. Isn’t it about time for President Barack Obama to say that? Or something like that?

Once again, a rump group of Republican radicals in the House are throwing the US government into chaos, threatening a shutdown of federal agencies (unless Obama agrees to smother Obamacare in the crib) that could harm the economy and setting up another showdown over the debt ceiling that could cause a financial crisis that stretches from the United States to markets around the world. The president has denounced this obstructionism gone wild. On Friday, he decried House GOP “grandstanding,” noting that “House Republicans will have to decide whether to join the Senate and keep the government open, or shut it down just because they can’t get their way on an issue that has nothing to do with the deficit.” And he criticized GOPers for playing politics with the full faith and credit of the US government: “do not threaten to burn the house down simply because you haven’t gotten 100 percent of your way.” Yet Obama has still not turned up the rhetoric full-blast, and this is a situation when he would be justified in amping up to an 11.

Let’s review for a moment. The House Republicans—led more these days by freshman Sen. Ted Cruz (R-Texas) than Speaker John Boehner—keep screaming that the American people have demanded that they block Obamacare. But what’s the evidence of that? Last year, the presidential candidate who called for repealing Obamacare received 59.1 million votes; the fellow who owned Obamacare earned 62.6 million votes. And House Democratic candidates together won over a million more votes than GOP House candidates. (It’s partially because of gerrymandering that this lopsided vote count resulted in Republican control of the House.) So however you slice it, the last time this nation voted, more people voted for the party of Obamacare. Yet because the GOPers control a little more than one half of one body of Congress (or, put it this way, a bit more than one-half of one-third of the legislative-executive branches of the government), their extremists believe they are entitled to take hostages to eviscerate a law that was previously passed by Congress, signed by the president, and okayed by a conservative-led Supreme Court.

This is absurd. It’s true that in politics, what’s permissible is only limited by what is possible. If you can get away with something ridiculous, well, then you can get away with it. But right now there are two clashing views of reality in the political cosmos: one is being pushed by a ready-to-blow-up-the-building minority; the other is accepted by…everyone else. Yet in many pockets of our current media environment, both views are granted equal currency. There are few referees who can call fouls and say, House Republicans you are out of line and this is outrageous—if you want to continue your never-ending crusade against Obamacare (like those Japanese soldiers stranded on Pacific islands who kept fighting World War II years after the emperor surrendered), then you have to do so with reasonable means (say, votes on specific repeal legislation) and without wrecking the government and the economy.

No longer are there media figures such as Edward Murrow or Walter Cronkite who can call out official chicanery and lies and change the course of public events. These days—for good or bad—there are fewer megaphones, and most are smaller. But there is one person who still commands a fair bit of attention: the president of the United States. If he pumped up the volume, it might be noticed.

Obama, as many O-watchers have long noted, doesn’t like to get angry in public. No doubt, from the start of his political career, he saw the value in avoiding the label of angry black guy. (Comedians Key and Peele have had much fun with their Obama’s Anger Translator bit.) But the time may have come for Obama to display his inner pissed-off president.

The public does take cues from its leaders. Certainly, the steady drumbeat of Obamacare trash talk from Republicans and conservatives—which has far surpassed words of praise from its proponents—has affected public attitudes toward the health care law. The White House has not continuously campaigned for the law, promoting its benefits. (The president has a job to do beyond selling what he has already enacted.) But the law’s lackluster standing in opinion surveys has encouraged Republican extremists to adopt their repeal-or-shutdown stance.

It’s up to Obama now to point out to American voters that the Republicans are not merely wrong. They are bonkers. Obama repeatedly asserts that the House Republicans are acting irresponsibly and endangering the economic well-being of the nation. But in the cluttered, cacophonous environs of today’s media, his calm, steely manner of conveying this message doesn’t pop. His style remains cool and measured. The cliché: He’s the adult in the room. He’s not a name-caller. He doesn’t lose his temper or control.

But there are situations when breaking with a successful style may be necessary. This current silly crisis could end up perfectly fine for the president: The GOPers refuse to yield, the government comes to a grinding halt, and the public blames Boehner and his not-so-merry band for the damage done. But avoiding a shutdown (now and weeks from now when the debt ceiling is reached) would be the best outcome, and to have a shot at that, Obama must isolate the House Republicans. A good-sized majority of the nation needs to view the Republicans as tantrum-throwing political terrorists.

Stately and measured complaints—even if pointed—might not be enough to persuade many Americans to see the Republicans as out-of-control extremists. Their extreme measures might call for extreme rhetoric on Obama’s part. Perhaps he could deploy his well-developed sense of sarcasm that he usually keeps leashed. Or a simple, these guys are nuts. But this would be a good occasion for the president to fully call out the renegade Rs, and a shot of wrath could do the trick.

Obama has long eschewed the partisan rancor of Washington, and maintaining an above-the-fray status has often served his political interests. But he’s never going to run for president again—avoiding the angry-black-man trap is now not as important—and desperate times do demand reconsideration of assumptions and behavior. This could well be the moment in his presidency that demands a strategic flash of anger and/or derision. Obama ought to tell us how he really feels about the House Republicans willing to close the government or trigger a default in order to undo his signature domestic law. Whatever the political impact of such a statement, it would sure have the benefit of being the truth.