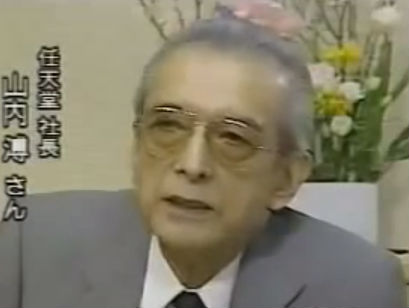 If you were born after 1970, there’s a good chance that a man responsible for much of the fun in your childhood and adolescence has just died.

Hiroshi Yamauchi—who passed away Thursday from complications of pneumonia at the age of 85—may not be a household name in America; but he played a huge role (one that is hard to overstate) in shaping the video game industry. Yamauchi was born in Kyoto, Japan in 1927, and worked in a military factory as a teenager during World War II. He became president of Nintendo in 1949 (at the age of 22), succeeding his grandfather.

When he assumed power, it was a playing-card company. Over the next decades of his tenure—through his “notoriously imperialistic style” of management and doing business—Yamauchi orchestrated Nintendo’s transformation into Japan’s first major video game company. One of his many pivotal business decision was hiring Shigeru Miyamoto, the “father of modern video gaming” who created The Legend of Zelda, Super Mario Bros., and Donkey Kong. Before stepping down as president of his multi-billion-dollar operation in 2002, Yamauchi had overseen the launch of Super Nintendo, Nintendo 64, GameCube, and the ubiquitous Game Boy. And he decided which games Nintendo would release.

Not bad for a businessman who never played a video game and never showed any interest in enjoying them himself. But what he had was a clear vision for where the global electronic entertainment market was headed, and an eye for talent and what people craved. He was a visionary and revolutionary in the video game business in the same way that David Geffen was a visionary in modern show biz. So if you ever spent hours upon hours as a kid playing GoldenEye, then by all means raise a glass.

Now here’s an old clip of him on Japanese TV news: