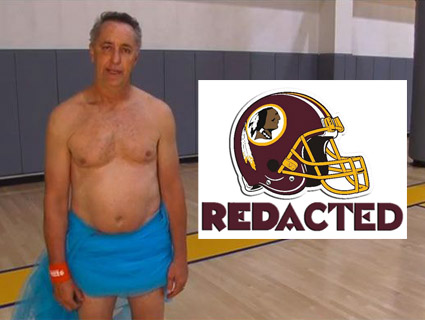 ESPN’s Rick Reilly—onetime Sports Illustrated great, 11-time National Sportswriter of the Year, and all-time GIF magnet—doesn’t think Washington, DC’s pro football team should change its name. Why? For starters, there’s this 2004 poll, in which 90 percent of Native Americans surveyed said they didn’t find the name offensive. On top of that, Reilly reports that his father-in-law, a member of the Blackfeet Nation, doesn’t think there’s anything wrong with it, and nor do people at three majority American Indian high schools whose sports teams play under the same name.

But there’s another reason gnawing at Reilly: He doesn’t like that paternalistic white journos are trying to cram change down Americans’—and Native Americans’—throats. As he wrote yesterday:

Trust us. We know what’s best. We’ll take this away for your own good, and put up barriers that protect you from ever being harmed again.

That’s right: Kind of like a reservation. For a thorough takedown of Reilly’s argument, take a look at this response by The Nation‘s Dave Zirin. (We’re just glad Reilly didn’t write his piece in verse.)

In the meantime, here’s a list of folks who have decided to no longer refer to the Washington [Redacted] by name. We’ll update it as more publications and journalists sign on.

You can imagine my dismay when I saw my name and words used to defend the racist Washington Redskins name. My son-in-law, ESPN’s Rick Reilly, completely misunderstood the conversation we had, quoting me as saying “the whole issue is so silly. The name just doesn’t bother me much. It’s an issue that shouldn’t be an issue, not with all the problems we’ve got in this country.”

But that’s not what I said.

What I actually said is that “it’s silly in this day and age that this should even be a battle — if the name offends someone, change it.”

In the memory of our Blackfeet relatives, it’s time to change the name. That would honor us.