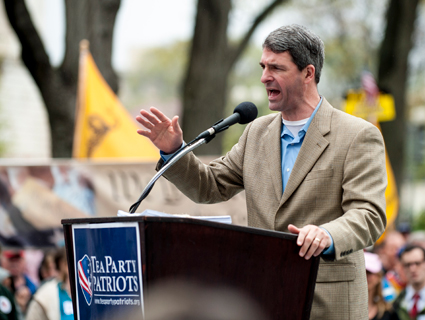 Virginia attorney general Ken Cuccinelli just can’t quit E.W. Jackson. When Jackson, a conservative activist and minister, won the Republican nomination for lieutenant governor of Virginia, his running mate Cuccinelli made a point of keeping his distance. Each candidate, he emphasized, should be considered “on an individual basis.” The reasons why were obvious: Jackson, a conservative activist and minister, got his start fighting AIDS prevention efforts during the height of the AIDS epidemic, wrote a book about how yoga is a gateway to Satan and rap music and death metal are “eggs of destruction,” and, more recently, expressed his adult opinion that gays are “ikky.”

But now, as the race enters its home stretch, whatever divide there was between the two arch-conservative candidates is more or less gone. Per the Washington Post:

Cuccinelli, the sitting attorney general, and Jackson, a Chesapeake minister, sounded a message of unity and cooperation at a breakfast event Saturday near Roanoke. State Sen. Mark Obenshain (R-Harrisonburg), who is running for attorney general, also attended.

“Would you please greet a man who I have the utmost faith in and honor for,” Jackson said as he introduced Cuccinelli, according to audio posted on YouTube. “We are friends. We are working together. Don’t believe the rumors. We’re working together.”

Cuccinelli told the audience, “It’s great to be here with the whole ticket. As E.W. said, we’re running together. We’re running hard.”

One reason for the reunion may just be that there’s not too much of a difference between the two social conservative politicians. Cuccinelli, who recently launched a website to defend the state’s anti-sodomy law, has come under fire from Democratic challenger Terry McAuliffe more recently for his opposition to no-fault divorce. And as a state senator, he launched a personal investigation into a so-called “Sextravaganza” at George Mason University that he feared would promote “libertine behavior.”